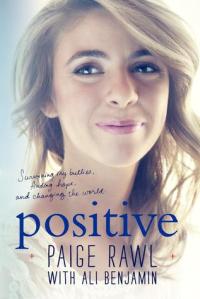 An astonishing memoir for the untold number of children whose lives have been touched by bullying. Positive is a must-read for teens, their parents, educators, and administrators—a brave, visceral work that will save lives and resonate deeply.

Paige Rawl has been HIV positive since birth, but growing up, she never felt like her illness defined her. On an unremarkable day in middle school, she disclosed to a friend her HIV-positive status—and within hours the bullying began. From that moment forward, every day was like walking through a minefield. Paige was never sure when or from where the next text, taunt, or hateful message would come. Then one night, desperate for escape, fifteen-year-old Paige found herself in her bathroom staring at a bottle of sleeping pills.

That could have been the end of her story. Instead, it was only the beginning. Paige’s memoir calls for readers to choose action over complacency, compassion over cruelty—and above all, to be Positive.

I liked Positive.  There’s been quite a gap between when I finished the book and when I’m actually reviewing this, so we’ll see how this goes.

Surprisingly, I do remember a little more of it than I thought I would.  She did have a lot of doctor’s appointments and medications, and it wasn’t until she was in middle school that she found out that she had HIV.  I can’t imagine finding out that you were born HIV-positive, and I can’t help but wonder what Paige thought was going on.  I honestly can’t remember if a reason was given for why her mom didn’t mention it until she was older, or what Paige thought she was going to the doctor for but if it’s always been a part of your life maybe she didn’t question it or give it a second thought.

I was sad at how her classmates treated her once word got out she had HIV.  It seemed like the school didn’t do anything to make things better for her and didn’t intervene unless they absolutely had to.  With the adults at her school, I had the impression she was the problem for bringing things to their attention, and not what her classmates were saying and doing.

The writing was okay, and it did go off on a few tangents, but her story is remarkable.  You really see how much the bullying affected her but you also see how she found support from others well.  She was really positive, and you could tell she really wanted to inspire others who struggled like she did.

Her story felt very accessible, and very personal.  The entire time I was reading Positive, it felt like she was telling me the story herself, and I did like how conversational it felt.  I also liked all of the resources and information she had throughout the book and at the end of the book.  I learned a little more about HIV, which was great because I feel like we hear about AIDS a lot more.

3 stars.  I really liked reading Paige’s story- though the school was really frustrating, I admire how Paige wanted to make a difference in other kid’s lives.  The writing was okay, but it seems like she was pretty young when she wrote it, so that might be why.