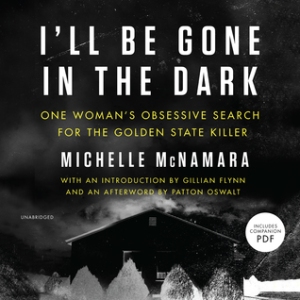 Book: I’ll Be Gone In The Dark: One Woman’s Obsessive Search For The Golden State Killer by Michelle McNamara, Narrated by Gabra Zackman

For more than ten years, a mysterious and violent predator committed fifty sexual assaults in Northern California before moving south, where he perpetrated ten sadistic murders. Then he disappeared, eluding capture by multiple police forces and some of the best detectives in the area.

Three decades later, Michelle McNamara, a true crime journalist who created the popular website TrueCrimeDiary.com, was determined to find the violent psychopath she called “the Golden State Killer.” Michelle pored over police reports, interviewed victims, and embedded herself in the online communities that were as obsessed with the case as she was.

I’ll Be Gone in the Dark —the masterpiece McNamara was writing at the time of her sudden death—offers an atmospheric snapshot of a moment in American history and a chilling account of a criminal mastermind and the wreckage he left behind. It is also a portrait of a woman’s obsession and her unflagging pursuit of the truth. Utterly original and compelling, it is destined to become a true crime classic—and may at last unmask the Golden State Killer.

After hearing about this book on My Favorite Murder, I knew I had to read it!  I ended up going with the audio book, since I really like the narrator, Gabra Zackman.

It’s part true crime story about the Golden State Killer, and part memoir.  I really liked hearing more about the how she investigated the case, and her interest in true crime, especially knowing that there’s a suspect in custody, and knowing that she passed away while writing the book.

It really struck me how determined she was to find out who he was and how much time she put into figuring out who did it.  It really saddens me that she didn’t live long enough to see it happen.  She doesn’t shy away from how much the case took over her life, and it’s a big part of the book.

McNamara really shows how terrifying his crimes were, and you feel the frustration of the detectives who keep hitting dead ends.  You feel how much the victims lives were changed, and yet, she never exploits their stories.  She really brought this case to life, and she really had a unique way of telling this story.

It’s a shame she never got to finish the book, and I did appreciate that it’s noted what she had already finished, and what had been put together by her fellow researchers.  I’m glad that this book was able to be published.  Because of that, it does feel a little disjointed, particularly in the audio book.  At least, at seemed really noticeable in the audio book, that it jumped around a bit, and while it does make me wish she had been able to finish writing, it is unavoidable considering the circumstances.

There’s an amazing attention to detail, and yet, it doesn’t feel like too much.  She has a lot of empathy for the victims, their families, and all of the people who worked on catching this guy.  While listening, I wanted them to find a break in the case, while knowing that when this book was being written, it was quite a ways off.  Even though I’ll Be Gone In The Dark felt very personal, it also felt objective.  She fact-checked and interviewed and researched, and it never felt biased, even though you knew she wanted the guy who did it to be caught.

This book is definitely worth checking out.  The audio does have sections narrated by Gillian Flynn and Patton Oswald (to whom McNamara was married to before her death), though most of the book is narrated by Zackman.  Zackman is one of my favorite narrators for a reason, and she really brought this book to life.

As for the Golden State Killer (since I feel like I’ve talked more about McNamara than the case she devoted years to researching), this is not a book to read or listen when you’re home alone…especially at night.  It’s terrifying how much planning he did, and I can certainly see why people were terrified.  His crimes stopped before I was born, but it’s terrifying to think that about how scared everyone must have been, knowing this guy was out there, but not caught.

5 stars.  McNamara did such an amazing job at bringing this story to life.  Zackman did a great job narrating as well, and if you like true crime, you really like this book.  To be honest, I think everyone should read it, regardless of your interest in true crime.