So, remember, years ago, when I used to do a monthly recap post called Currently Obsessed With?  They were going pretty strong and then they just sort of stopped, and lately, I’ve been thinking that I should bring that back.  Don’t get me wrong, I love doing the book reviews and those are not going anywhere.  But I’ve been doing my internet link posts, and it’s been nice to talk about something other than books.

I made my mom an Easter basket!  It was really fun getting some stuff to put in there, and I wanted to get her something for Easter.  I picked up some food from the Honey Baked Ham store, and it was pretty good.  I figured the places that were open would be busy, and it seemed easier than making something.

I also cracked and bought an Instant Pot.  I’ve only used it once, but it makes pretty good taco meat.  For the longest time, I thought it was just a fad, but it doesn’t seem like it’s going anywhere.  I think it’ll come in handy during the summer because there is no way I’m turning my oven in my apartment.  Unless I want it to get even more warm than it already is.

If anyone has any good recipes, send them my way.  I’ve found a few recipes that look good, and I also bought Dinner In An Instant and Comfort In An Instant.  I have yet to use them, of course, but I’m looking forward to using it.

I’ve been on a shopping spree lately, especially with clothes.  I hate buying clothes, but some of the clothes I had are starting to fall apart so it was time for some new clothes.  I shared some of the tops I’ve purchased lately in my latest around the internet post, and I am totally that person who will buy the same shirt in every color possible.  I’m really picky about clothes, so when I find something I like, I’ll get in every color because I know it fits well, and it saves me from trying to find other things.

I’ve been on a skincare kick lately, and I don’t know why I try end up using products that aren’t Clinique.  I’m not sure why but my skin also seems to look and feel better when I use it.  I’ve spent quite a bit of time either in Sephora or on their website lately…I love the liquid facial soap in mild, the clarifying lotion 2 and, in a big departure for me, I actually decided to give the dramatically different hydrating jelly a try.  I’ve only been using it for about a week, so I’m going to hold off on opinions on it for now.  I also picked up these wipes when I was in Sephora, and I really like them!  They’re great for when I need to cleanse but don’t feel like doing my whole routine.

I’ve been doing a lot of shopping lately, now that I’m looking this post over!  Clearly, I’ve been shopping a lot lately.

I’ve been crocheting some lately.  I have to take some pictures of what I’ve been working on- blankets, mostly- but I have a hat I’m working on right now.  I have a few projects in mind- blankets, of course, but I was thinking of making some Christmas ornaments as presents, so now would probably be a good time to start on that.

It really sounds like I have a lot of blankets, don’t I?  Okay, there’s 5 that are finished, plus two in progress.  One is made up of granny squares, and I still haven’t finished sewing it together.  One of these days, I will.

I recently subscribed to CreativeBug, and I got some art supplies at Michael’s.  They have some art classes and lettering classes that look really cool, and while I love crochet, I’ve also been wanting to try to something else.  I’m pretty excited, and I’ll try to remember to get some pictures of the stuff I do, so I can share them.  If anyone has good recommendations for art supplies, I’d love to hear them, especially for pens!

I’ve been going to a book club for the last year or so!  It’s hosted by Mysterious Galaxy, which is a local bookstore here in San Diego, and it’s really fun.  It’s been great because I never would have picked up some of the books on my own.  I haven’t loved all of them but that’s how those things go sometimes.

And the last thing I’m going to talk about is YALLWEST!  I’ve been meaning to go ever since I heard about it, but it never seemed to work out.  But this is the year it’s going to happen, and I’m excited.  It’s going to be a long drive since it’s in Santa Monica, but since my mom usually works early on Saturday mornings, I’ll probably head up there after dropping her off.

I think that’s all for today!  I don’t know know how often I’ll be doing these posts- hopefully, I’ll start doing them monthly again but it may be more sporadic.  And I’ll definitely be keeping it as Currently Obsessed With.

So far, I really like the customizable Maven box from Julep!  The September box was my first box after upgrading, and I’m actually glad that I upgraded my Maven box, because the ability to customize to my box is really great when there’s a color I’m not sure about or a color I KNOW I don’t want.  For September, I knew I didn’t want one of the polishes and that actually worked out great, because I was in desperate need of their Freedom Polymer top coat.  I was really happy that I was able to swap out the color I didn’t want for a top coat I really needed. 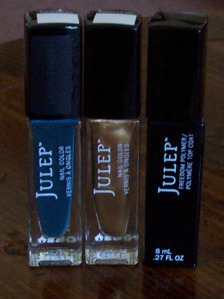 I really liked Ryan, which has a matte finish to it.  And I was really intrigued by Mahima, which is gold but not a sparkly, metallic or chrome gold that I’m used to!  I wasn’t sure about it as a creme nail polish, but I was reminded very much of gold leaf that’s used in paintings from hundreds of years ago. 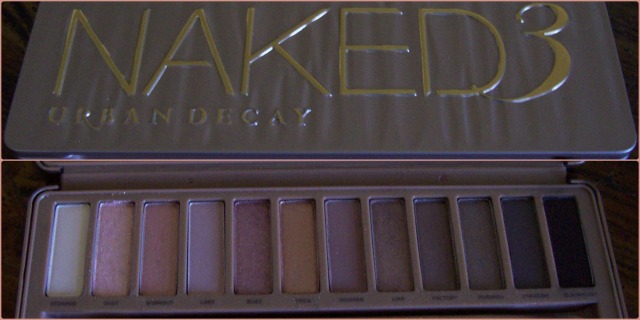 Remember last month, when I talked about the Urban Decay Naked3 palette?  I actually like it a lot! The colors are really neutral, and they’re great for everyday use.  I’m sure someone who’s much more comfortable and confident in their make-up applying skills would be able to create some awesome looks from it, but it’s great for people (like me) who want something really simple in the morning. My only issue is that some of the colors don’t show up really on someone with really fair skin, to the point that even I had trouble telling if I had any on or not.  Granted, I’ve only tried Dust, Burnout, Buzz, and Liar, and Dust and Buzz are my favorites.  Still, I really like the colors, and it’s one of my favorite palettes that I’ve actually used.

I’ve been crocheting a bunch this month!  I tested out a crown pattern for a friend, I made a bunch of face scrubbies, a scarf, I finished the cowl I was working on and I started a washcloth.  I like that the scarf is really textured and wavy, which doesn’t show up very well in the picture.  As for the cowl, I like the color, but I don’t like it as one solid color- it definitely needs a stripe of color every once in a while.  And when I tried it on…it felt like I was being choked a little bit, so I don’t know if I maybe needed to add some extra stitches, or if I maybe need to block it, or if that’s how cowls are supposed to be…I’ve never worn a cowl (or made one, for that matter) so I have no clue if it’s just how cowls are or if it’s the pattern and needs to be a little bigger or what’s going on.

And I abandoned that green shell hat I was working on.  It seemed like it was going to be way too big, and it seemed like each row took FOREVER to do…once I got to the shell part of. One of these days, I’m going to have to completely frog it, so I can use the yarn for something else.  I also tested a pattern for fingerless mitts…well, I got through the one, and now I just need to do the other one.  Hopefully it’ll start cooling down so I can start working on my blanket again too.  Plus, I have my eye on a few other projects, so there may be more news on that front.

I got Seriously Delish, which is a cookbook by Jessica Merchant…who also has a totally awesome food blog.  I haven’t made anything from it yet, but everything looks so good!  And I want to make almost every single recipe in the book, which is super-rare for me.  I also got Rose Under Fire by Elizabeth Wein, and I’m really curious about this Code Name Verity companion novel, especially since I’m reading Code Name Verity right now.

I’ve come across a lot of interesting things this month, and while I only pick a few to share every month, this month I’ve decided to do a separate post because there are quite a few articles I have thoughts about, and I just want to talk about them a little more.

I will say that I’ve made these crescent sausage bites before, and they go over sowell, and these Nutella brownies are completely awesome.  And I was intrigued by this crock-pot BBQ chicken.

So, I actually have NO music for this month.  My listening to stuff time has been really sporadic lately, and whatever listening time I do have is trying to keep up with a small number of the podcasts I managelisten to.  I hate having to cut down on the number I listen to, but the time just isn’t there right now.  Anyway, I thought I’d share a few of the ones that I’ve been listening to.

Hope everyone has a great October!