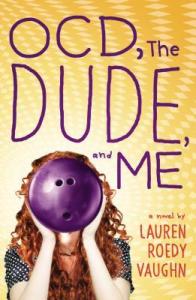 Book: OCD, The Dude, and Me by Lauren Roedy Vaughn

With frizzy orange hair, a plus-sized body, sarcastic demeanor, and “unique learning profile,” Danielle Levine doesn’t fit in even at her alternative high school. While navigating her doomed social life, she writes scathing, self-aware, and sometimes downright raunchy essays for English class. As a result of her unfiltered writing style, she is forced to see the school psychologist and enroll in a “social skills” class. But when she meets Daniel, another social misfit who is obsessed with the cult classic film The Big Lebowski, Danielle’s resolve to keep everyone at arm’s length starts to crumble.

I didn’t like OCD, The Dude And Me as much as I thought I would.  It really seemed like a book I would like, but I ended up being slightly disappointed.

For one thing, she doesn’t seem to be OCD at all, which is weird for a couple reasons.  One, we see her inner thoughts, so it’s weird that it doesn’t come up.  And two, other than needing her books to organized in a certain way, and being upset that they get knocked over and doesn’t have time to re-organize, or a reference to flicking a light switch on and off…I didn’t get the OCD part of it all.  She definitely has social anxiety, and possibly PTSD, but OCD seems random.  Because of the diary/essay format, she comes across as quirky more than anything else.

Two: I didn’t get her obsession with The Big Lebowski, which only shows up in the last third of the book, and for no reason.  If she’s so obsessed with it, why did it randomly come up?  I’ve never actually seen The Big Lebowski, so unless there are references in the book I’m not picking up on because of that, it seems to be a non-factor.

Three: For someone who’s supposed to be a senior in high school, she writes a lot younger than that.  The whole prom thing was slightly confusing, because I really forgot most of the time that she was older than she sounded.

Four: The essay and diary format was interesting but it felt like overkill and a little too much.  Granted, there were a few times where I couldn’t help but laugh, but it would randomly switch between essays, journal entries, notes, and letters, and it felt really jumbled and not very coherent.  Which is sort of understandable, given we get some inner thoughts, and it flowed okay, but not well enough.

Five: We don’t see much reflection or change in Danielle.  She seems to remain pretty much the same the entire book, and she fell pretty flat.  Also, for someone who hasn’t had a friend in years, she seemed to get close to Daniel pretty fast, which is surprising, considering she seems to have a lot of anxiety about talking to people. Maybe it’s because of the format, but given the format, I felt like we should have seen even a slightly different Danielle by the end of the book.

Six: What is so alternative about this high school?  All of the kids seem to be be perfectly fine, and it didn’t make sense why it was so alternative, because really, it came across as your typical high school.

2 stars.  It was okay, but not the book I expected.  I’m feeling pretty ambivalent about the book.

Where I Got It: I received an advanced copy of the e-book from netgalley.com.  This hasn’t influenced my review in any way. Promise!

This innovative, heartfelt debut novel tells the story of a girl who’s literally allergic to the outside world. When a new family moves in next door, she begins a complicated romance that challenges everything she’s ever known. The narrative unfolds via vignettes, diary entries, texts, charts, lists, illustrations, and more.

My disease is as rare as it is famous. Basically, I’m allergic to the world. I don’t leave my house, have not left my house in seventeen years. The only people I ever see are my mom and my nurse, Carla.

But then one day, a moving truck arrives next door. I look out my window, and I see him. He’s tall, lean and wearing all black—black T-shirt, black jeans, black sneakers, and a black knit cap that covers his hair completely. He catches me looking and stares at me. I stare right back. His name is Olly.

I really liked Everything, Everything!  I wish I loved it, and it came really close to me loving it…but overall, it’s been a while since I’ve been so emotional/excited about a book.

I really liked Maddy, and I felt for her.  She can’t leave her house, and she only has her mom and Carla.  And Olly.  I loved her relationship with Carla, who was nurse and friend, and Maddy really needed that.  I can’t imagine having such a rare disease, and it makes me wish we learned more about it in the book, because we don’t get anything about it.  Not that the book has to include more about the disease, but at the same time, if you’re going to have a character who has a rare disease, it might be good to have more than a vague explanation of what it is.  I have a theory, but it’s the kind of theory that is a huge spoiler, so I won’t mention it here.  I like that she is not defined by her disease- while the book is about a character with SCID, it’s also about so much more than that.

I did like how the story was told- there are graphs and charts and IM conversation and e-mails and vignettes, and it worked so well for the book.  Something like that, particularly when the entire book is told that way, has the possibility of going very wrong (at least for me), but something about it worked really well for Maddy and her story.

I really liked her relationship with Olly, and I feel like, through him, her world expanded a lot.  In the beginning, it is slightly insta-love-y, so just keep that in mind if that’s not your thing.  But give the book a chance, because it really is an awesome book.

4 stars.  Overall, I really liked Everything, Everything!  It made me feel the feels, and even though I’m not sure about a few things (which did lower the rating for me), I would still recommend the book.