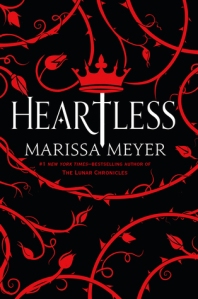 What It’s About: Long before she was the terror of Wonderland, she was just a girl who wanted to fall in love. Catherine may be one of the most desired girls in Wonderland, and a favorite of the unmarried King of Hearts, but her interests lie elsewhere. A talented baker, all she wants is to open a shop with her best friend. But according to her mother, such a goal is unthinkable for the young woman who could be the next queen.

Then Cath meets Jest, the handsome and mysterious court joker. For the first time, she feels the pull of true attraction. At the risk of offending the king and infuriating her parents, she and Jest enter into an intense, secret courtship. Cath is determined to define her own destiny and fall in love on her terms. But in a land thriving with magic, madness, and monsters, fate has other plans.

In her first stand-alone teen novel, the New York Times-bestselling author dazzles us with a prequel to Alice’s Adventures in Wonderland.

What I Thought: I really liked Heartless!  The Lunar Chronicles is one of my favorite series, and when I found out Meyer was coming out with another book, I knew I had to read it!  At first, I wasn’t sure about it, and initially, it was just okay.  But the more I read, the more I fell in love with the book, and the more I liked Catherine.

She’s an interesting character, and at first, she really is the sweetest person who loves baking.  It was hard to see her becoming the Queen Of Hearts that we all know in Alice In Wonderland, but the change she made into the character we all know was really believable.  It was a pretty fast change, but it worked for her character, and it was easy the events that led to her change were so easy to believe and made perfect sense for her.

By the time I was finished, I was ready for more set in this world, and that was when I realized that it was a stand-alone.  Which is fine, since it is Meyer’s take on Alice In Wonderland and the Queen Of Hearts.  But I am curious to see what Alice In Wonderland would be like if it were done by Meyer, because she did something pretty cool with Cinder.

My Rating: 4 stars.  It took me a little bit to get into Heartless, but by the end, I really wanted more set in this world!

Published May 2015 by Disney Hyperion|352 pages

What It’s About: Ten years ago, God gave Braden a sign, a promise that his family wouldn’t fall apart the way he feared.

But Braden got it wrong: his older brother, Trey, has been estranged from the family for almost as long, and his father, the only parent Braden has ever known, has been accused of murder. The arrest of Braden’s father, a well-known Christian radio host, has sparked national media attention. His fate lies in his son’s hands; Braden is the key witness in the upcoming trial.

Braden has always measured himself through baseball. He is the star pitcher in his small town of Ornette, and his ninety-four-mile-per-hour pitch already has minor league scouts buzzing in his junior year. Now the rules of the sport that has always been Braden’s saving grace are blurred in ways he never realized, and the prospect of playing against Alex Reyes, the nephew of the police officer his father is accused of killing, is haunting his every pitch.

Braden faces an impossible choice, one that will define him for the rest of his life, in this brutally honest debut novel about family, faith, and the ultimate test of conviction.

What I Thought: I really wanted to like Conviction, and it seemed like it would be a great book, but it ended up being really frustrating to read. There were so many different angles, and I felt like none of them really got the attention they deserved. There’s Braden, and the complicated family stuff- his mom left him, and the same happened with his half-brother’s mom. There’s a dad, who seems abusive, and pushed baseball on his kids because his dream of being a professional baseball died when he got injured. And all of the stuff with a brother, who’s gay, and was kicked out and basically almost killed by their dad. On top of that, Braden’s dad is accused of killing a cop, and people may or may not have lied about what happened that night.

I felt like a lot of things weren’t clear, like with what happened on the night that the cop died, and things were hinted at, but for the most part, nothing was clearly mentioned or explained. That was when it matched up with what was previously mentioned in the book, and there was definitely at least one time, where things didn’t match up at all.

Not only that, but you have different time lines- there’s Braden’s memories of his dad, there what happened the night the cop died, and what was going on in the present, and it made things less coherent and really jumbled. It didn’t feel very focused, and I felt like I was reading all of these different pieces that didn’t really come together. The flashbacks were also poorly done in my opinion, and randomly thrown in with no transitions before and after.

My Rating: 2 stars. I didn’t dislike it enough to give it 1 star, but it was really confusing and all over the place. I can see why people like it, but it wasn’t for me.

What It’s About: On the Fives court, everyone is equal.

And everyone is dangerous.

Jessamy’s life is a balance between acting like an upper-class Patron and dreaming of the freedom of the Commoners. But away from her family, she can be whomever she wants when she sneaks out to train for the Fives, an intricate, multilevel athletic competition that offers a chance for glory to the kingdom’s best competitors.

Then Jes meets Kalliarkos, and an improbable friendship between the two Fives competitors—one of mixed race and the other a Patron boy—causes heads to turn. When Kal’s powerful, scheming uncle tears Jes’s family apart, she’ll have to test her new friend’s loyalty and risk the vengeance of a royal clan to save her mother and sisters from certain death.

In this imaginative escape into an enthralling new world, World Fantasy Award finalist Kate Elliott’s first young adult novel weaves an epic story of a girl struggling to do what she loves in a society suffocated by rules of class and privilege.

What I Thought: I picked up Court Of Fives based solely on the recommendation of Gail Carriger, and it was a fun, interesting read. I do feel like there are a lot of similar books out there, plot-wise but I really liked this one because it felt different enough to hold my attention. I really liked the competition, and how things aren’t what they seem.

It’s interesting that the history they know seems to be slightly different than what actually happened (which isn’t surprising at all), and I was really intrigued by the original story, and the parallels to Jessamy’s family, particularly with her parents. I did like that her dad stuck by her mom, even though it would have advanced his career a lot more. He still seemed really ambitious, and it didn’t seem to matter in the end, since they lost their main protector. But it did seem to matter to him, at least for a little while.

I kind of wish the competition was explained a little more, because even now, I’m not quite sure how to explain it, or even what it is. Something about it reminded me of the actual Hunger Games, but far less deadly. And something that relies a lot more on actual practice and logic and strategy. I’m definitely looking forward to reading the rest of the series, and how things work out for Jessamy and her family.

My Rating: 4 stars. This was intriguing and interesting and a really good read.