I have quite a few books I want to talk about, so I figured I share some quick thoughts on some of them!

What It’s About: China, 1898. Bands of foreign missionaries and soldiers roam the countryside, bullying and robbing Chinese peasants.

Little Bao has had enough. Harnessing the powers of ancient Chinese gods, he recruits an army of Boxers–commoners trained in kung fu–who fight to free China from “foreign devils.”

Against all odds, this grass-roots rebellion is violently successful. But nothing is simple. Little Bao is fighting for the glory of China, but at what cost? So many are dying, including thousands of “secondary devils”–Chinese citizens who have converted to Christianity.

What I Thought: I liked it, but not as much as I liked Saints.  I think reading Boxers before Saints will help you understand what’s going on in Saints, because it goes into greater detail about what the Boxer Rebellion actually was. I really like the idea of history being told in the form of a graphic novel.  It’s been a while since I’ve read it (over a month), and now I’m finding that I’m having a hard time talking about the book and what I thought about it.  It’s definitely worth reading, though, and it does make me want to learn more about it. Whether I actually do so remains to be seen, but maybe one day…

It is a good introduction to the subject, though, and I think if you’re new to graphic novels (like I am), Boxers (and Saints) is a really good place to start.  I also liked seeing the other side of the story, and that there are many sides to one event.

My Rating: 3 stars.  Mostly because it’s a good introduction to the Boxer Rebellion and the format makes it different. But it also gets 3 stars because I don’t remember enough to give it a higher rating. 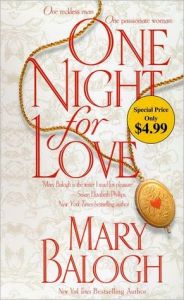 Book #2: One Night For Love by Mary Balogh

What It’s About: One reckless man…One passionate woman.

Enter the world of Mary Balogh—the glittering ballrooms and vast country estates of Regency-era England, where romance, with all its mystery, magic, and surprises, comes vibrantly alive.

It was a perfect morning in May…

Neville Wyatt, Earl of Kilbourne, awaited his bride at the altar—when a ragged beggar woman raced down the aisle instead. The cream of the ton saw him stare, shocked, then declare that this was his wife! One night of passion was all he remembered as he beheld Lily, the woman he’d wed, loved, and lost on the battlefield in Portugal. Now he said he’d honor his commitment to her—regardless of the gulf that lay between them.

Then Lily spoke her mind…

She said she wanted only to start a new life—wanted only a husband who truly loved her. She had to leave him to learn how to meet his world on her terms. So Lily agreed to earn her keep as his aunt’s companion and study the genteel arts. Soon she was the toast of the ton, every inch a countess fit for the earl, who vowed to prove to his remarkable wife that what he felt for her was far more than desire, that what he wanted from her was much more than…One Night for Love.

What I Thought: This is another one I don’t remember a lot about.  I vaguely remember liking it, but not being super-into the romance.  I do remember not being surprised by the fact that she wasn’t really dead, and that he never told anyone about it.  Other than that, nothing stands out.

What It’s About: When John Rechy’s explosive first novel, City of Night, was first published in 1963, it became a national bestseller and ushered in a new era of gay fiction. Bold and inventive in his account of the urban underworld of male prostitution, Rechy is equally unflinching in his portrayal of one hustling “Youngman” and his restless search for self-knowledge. As the narrator careens from El Paso to Times Square, from Pershing Square to the French Quarter, we get an unforgettable look at a neon-lit life on the edge. Said James Baldwin of the author, “Rechy is the most arresting young writer I’ve read in a very long time. His tone rings absolutely true, is absolutely his own; and he has the kind of discipline which allows him a rare and beautiful reckless.”

What I Thought: This was a really hard book to get through, and I really struggled with it.  I can see why it was such an important book when it was published, considering what the book is about.  But I had a hard time with it, and it felt really dry.  I know it’s loosely autobiographical, and it really read that way.  It’s not a bad thing, but it just didn’t work for me.

It is a glimpse into what life was like during that time, but it seemed to drag on.  It also seemed really repetitive, and I’m sort of doubting why I took the time to finish the book.  It just seemed like an endless cycle of the same behavior for the main character, but I suppose it goes with the lifestyle that the character is living.

My Rating: 2 stars.  It’s definitely not the book for me, and it was a struggle for me to get through but I can see why it gets a lot of praise.