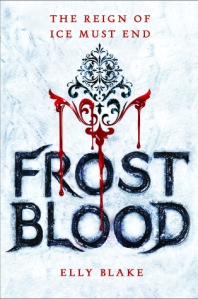 Seventeen-year-old Ruby is a Fireblood who has concealed her powers of heat and flame from the cruel Frostblood ruling class her entire life. But when her mother is killed trying to protect her, and rebel Frostbloods demand her help to overthrow their bloodthirsty king, she agrees to come out of hiding, desperate to have her revenge.

Despite her unpredictable abilities, Ruby trains with the rebels and the infuriating – yet irresistible – Arcus, who seems to think of her as nothing more than a weapon. But before they can take action, Ruby is captured and forced to compete in the king’s tournaments that pit Fireblood prisoners against Frostblood champions. Now she has only one chance to destroy the maniacal ruler who has taken everything from her – and from the icy young man she has come to love.

This is a book I’ve meaning to read for a while, and I finally got around to it.  I liked it, but not as much as I thought I would.

Here’s the thing with this book.  I liked the idea behind it, and I like the contrast in powers- you can’t go wrong with fire and frost on opposing sides.  But what works against it is there are a lot of other similar books out there, and it was hard to love this one.  There were a few books I was reminded of, and it was hard to get into it, though I did like the opposing powers thing.  It made it seem at least somewhat different, at least on the surface.  Maybe if I hadn’t read books like The Red Queen, I would have liked it a lot more.  This book is definitely part of a trend, but maybe I need some sort of distance from the trend.

I couldn’t begin to tell you a thing about Ruby, other than she seems to have some control over her powers.  That was a nice change from her learning she has some sort of ability she’s not supposed to have.

Other than that, it’s your typical YA fantasy, so I wasn’t particularly surprised by what happened.  Still, I’m curious to see what happens next.  While I’m not running out to read the next one, I will pick it up at some point.  On the plus side, the cover is really cool, and I feel like I don’t comment on covers a lot, so this is a pretty good one, in my opinion.

3 stars.  I liked it, and fire and frost are pretty cool opposing powers, but it would have been interesting to see something that’s a little less obvious, as far as powers go.