I thought I’d do another nail polish specific post, because I have so much to talk about!

I wore Julep’s Something Blue, Leah, Payton (with an Essie Lux Effects top coat) and OPI’s No Room For The Blues. 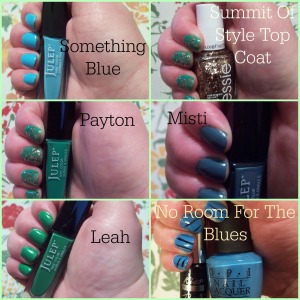 I don’t know how I feel about Something Blue.  It’s a pretty shade of blue, and it would look great as a back-drop for nail art.  I think I like it better as an accent nail if I do it on its own, maybe my entire hand if there’s something glittery on top.  I will say that there were weird patches where it didn’t cover my entire nail, and I’m pretty sure it wasn’t how I put it on, because it’s the same way I always put on nail polish, and there’s never been weird strips in the middle of my nail with no polish on it.  It’s not streaky, so maybe it’s the brush or something?

I really like Leah and Payton, which are really good colors for St. Patrick’s Day (and also the reason why I wore them).  I really liked Leah, and it’s also a really pretty green for spring and summer.  I also really like Payton, which I wore with Essie’s luxeffects in Summit Of Style.  Payton is streaky and needs a couple of coats to not only even itself out but for you to really see the pretty Kelly green that it is.  Since I wore Payton the week of St. Patrick’s day, I knew something gold was in order, and I ended up wearing the Essie top coat over it.  I really hate the brush, and I felt like I had to apply the gold glitter in strips.  But I really liked how it didn’t feel glittery, even though it was, and it would be really good at Christmas/New Years.  Like most glitter nail polish, it’s a pain to remove, but I always seem to forget that when I’m wearing it!

OPI’s No Room For The Blues seemed like a good Spring/Easter blue, and it sort of reminds me of Something Blue.  I also wanted to do a little something to jazz it up, so I added some stripes.  The ones on my right hand ended up a little weird, partly because I don’t usually do stripes or dots or anything so I’m not that good at it, and partly because I’m left-handed.  The ones I did with my right hand aren’t that much better, but they are a little bit better.  I do feel the same way about No Room For The Blues that I do about Something Blue. 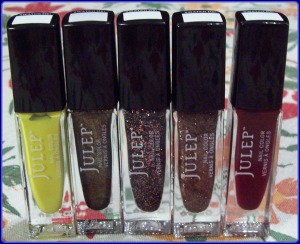 I got the Julep mystery box, and while I wasn’t sure about getting it, I was actually really happy with it overall!  I ended up getting a couple of duplicates- Dawn, which I wore a few weeks ago, and Candace, which I forgot I had until I did an inventory of my nail polish.  We’ll get to that later.

I also got Beth, Sharna and Ilga, and Ilga is the only one in the box I wouldn’t ordinarily go for it.  It’s a really good Halloween red, so I’m pretty wear it sometime in October.  And Beth and Sharna are up my alley, even though Sharna was in a Maven box that I skipped a few months ago.

I ended up doing an inventory of the nail polish I have.  I have a lot (especially of Julep) and figured it might be nice to have an inventory of what I have.  I’m glad I did, because that’s how I figured out I had Candace already.  And it’s much easier searching a spreadsheet than it would be to look at every single bottle in my nail polish caddy.  Seriously.  The only thing will be making sure I keep it updated, but I don’t think it’ll be that much of an issue since I tend to stick with Julep these days.

I did end up skipping March’s box, mostly because I really needed a break from getting nail polish.

And I have a few other nail polishes to talk about!  I got Brigitte in the Maven secret store, plus a couple of base coats, another OPI nail polish, and the Essie top coat.

I’m on a base coat kick, and I’m trying to find a few different ones I like.  My nails do need a little bit of strengthener sometimes, so I usually use one of those, but I was intrigued by the idea of a super-sticky base coat, so we’ll see how well that works out.  And I haven’t worn Brigitte, but I definitely wanted a white-white nail polish.  And the new OPI one looked interesting.  I also have my eye on a couple of the Morgan Taylor Cinderella collection polishes so I’m hoping that I have a chance to get them before they go!  I know I said a couple of paragraphs ago that I needed a nail polish break.  But Julep will always be there, while these Morgan Taylor ones will probably be a limited edition sort of thing.