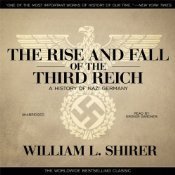 Book: The Rise And Fall Of The Third Reich by William Shirer|Narrated by Grover Gardner

Goodreads Summary: With a new afterword by the author, this unabridged edition tells the complete story of Hitler’s empire. Famed foreign correspondent and historian Shirer spent five and a half years sifting through the vast paperwork behind Hitler’s drive to conquer the world to bring this definitive record of one of the most frightening chapters in the history of mankind.

So, I finally finished The Rise And Fall Of The Third Reich!  After almost 7 months…I managed to get through, and I have never been more relieved to finish a book.

Here’s the thing: I don’t feel completely confident in my ability to review this book, because it’s taken me so long to finish, and at this point…well…this sums up how I feel about everything in this book…

This is totally what happened with this book!

I mean, if I ever read or see anything involving Nazi Germany, and things seem vaguely familiar, it’s probably because of this book! Here is what stuck out to me, though.

One: I think I vaguely knew that the Nazi’s kept crazy meticulous records, but it wasn’t until I listened to this book that I realized how detailed their records and documents were.  I mean, seriously.  I’m impressed by the amount of time Shirer spent looking through so many of these records.

Two: While I couldn’t tell you specific things about what happened, I can tell you that it was really easy to see how Hitler came into power, and how he managed to take over Germany.  He just happened to come along at the right time…as weird as that may seem, that’s my recollection.

Three: Shirer was in Germany, working as a journalist during the 1930’s, and he has a really interesting perspective.  I do remember that he does distinguish between his personal experiences, and the documents he looked at, so he does admit to his own biases.

Four: This book was surprisingly easy to listen to, and while there’s a lot of detail- I mean, it is 57 hours, after all- it’s really readable. Still, I found that I could only listen to it for 30 minutes to an hour at any given time.  If I could go back re-read it, I think I’d go with the print version, because it’s a lot to take in and remember.  It’s detailed while not being boring or tedious.  And Grover Gardner did really well as a narrator.  I would definitely listen to other books he’s narrated, because he just has a voice for non-fiction and history.

I really liked The Rise And Fall Of The Third Reich.  Well, as much as one can like a book about Nazi Germany, and how they came into power.  It’s a great book if you want to know more about the Nazi’s and the political decisions Hitler made.  It’s easy to read, which is sort of impressive, given that there’s a lot of information to take in.  I am wishing I had gone with the print version instead of the audiobook, but either way, it’s definitely worth reading.  The Rise And Fall Of The Third Reich gets 4 stars.