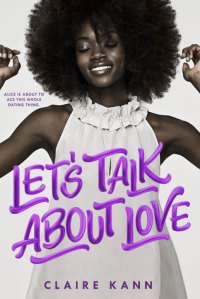 Alice had her whole summer planned. Non-stop all-you-can-eat buffets while marathoning her favorite TV shows (best friends totally included) with the smallest dash of adulting–working at the library to pay her share of the rent. The only thing missing from her perfect plan? Her girlfriend (who ended things when Alice confessed she’s asexual). Alice is done with dating–no thank you, do not pass go, stick a fork in her, done.

But then Alice meets Takumi and she can’t stop thinking about him or the rom com-grade romance feels she did not ask for (uncertainty, butterflies, and swoons, oh my!).

When her blissful summer takes an unexpected turn, and Takumi becomes her knight with a shiny library employee badge (close enough), Alice has to decide if she’s willing to risk their friendship for a love that might not be reciprocated—or understood.

I really liked this one!  I didn’t love, and I was expecting a different story than the one described, but I still really liked it.

I was interested in this one because it features an asexual main character.  It’s rare to see that in a book, and I thought Kann did a great job at describing what it was like for Alice as she had to navigate relationships.  It rang true, and it didn’t define Alice, but it was still a big part of who she was.  It wasn’t something other people understood, particularly the people she dated, and it made me sad that it was something people didn’t understand.  I wasn’t surprised, but it still made me sad that her girlfriend thought Alice didn’t care about her because she didn’t want to have sex her.

I didn’t care for her friend Feenie, and it seemed like Alice was definitely the third wheel.  I don’t know that she necessarily intentionally left Alice out, but she didn’t seem to like that Alice had other people in her life.  And yet, there were a few times were Feenie and Ryan wanted to have a “family” night and then they ended up leaving her to do their own thing.  Feenie seemed all over the place, and it was hard to like her.  The one thing I did like, though, was that Feenie wanting to be a housewife and stay-at-home mom wasn’t seen as a bad thing, and it was the right choice for her.

As for Alice, I loved her interest in interior design and pop culture.  I wasn’t expecting her to want to be an interior designer, but I hope it works out for her.  To be honest, I expected her potential career path be in the library or something with pop culture.  She definitely struggled with what her parents wanted her to do, and I liked seeing her struggle with how to pay for everything once they told her they would stop paying for college because she didn’t want to go to law school.  It felt very real, and it’s something I think a lot of people could relate to.

Characters aside, I had a hard time with Cutie Code.  It comes up a lot, especially at the beginning of the book, and then it sort of fizzles out.  It was odd to me, especially because the scale and what each color means was never clearly defined.  I was expecting a graphic or something, explaining it in more detail, and that never happened.  I would have be fine had it not been in there.

I think I was expecting a different story, and I’m not sure why.  I mean, the blurb isn’t wrong, but I was also bored, and it felt like the book was missing something.  What that is, I honestly have no idea.

That being said, this book seemed more like New Adult than YA to me.  And it was nice reading about a college-aged character that wasn’t completely focused on sex and romance.  There was romance, but there was a nice balance between dating and navigating life on your own.  It’s what I want from NA, and I feel like a book like this is pretty rare.   Or at least uncommon.

4 stars.  I didn’t love this book, obviously, but there were a lot of things I really liked.  It’s definitely worth checking out.