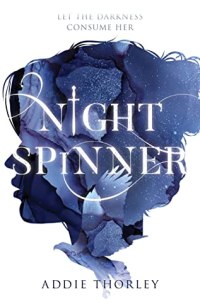 A must-read for fans of Leigh Bardugo’s Grishaverse, transforming The Hunchback of Notre Dame into a powerful tundra-inspired epic.

Before the massacre at Nariin, Enebish was one of the greatest warriors in the Sky King’s Imperial Army: a rare and dangerous Night Spinner, blessed with the ability to control the threads of darkness. Now, she is known as Enebish the Destroyer―a monster and murderer, banished to a monastery for losing control of her power and annihilating a merchant caravan.

Guilt stricken and scarred, Enebish tries to be grateful for her sanctuary, until her adoptive sister, Imperial Army commander Ghoa, returns from the war front with a tantalizing offer. If Enebish can capture the notorious criminal, Temujin, whose band of rebels has been seizing army supply wagons, not only will her crimes be pardoned, she will be reinstated as a warrior.

I liked Night Spinner, but not as much as I thought I would.  It’s a cool idea, though.

I think part of the problem is that in the week between finishing the book and writing this review, I’ve forgotten a lot.  I haven’t been reading much lately, so I honestly thought that I’d have no problem remembering one of the few books I’ve read.  But that was not the case with this book.  I remember some things, but not every little detail.

I wanted to know more about her world.  I can’t remember a lot about it, but the magic system was really interesting.  Of course, Enebish has a rare magic, and when things go wrong one day, she’s sent off to a monastery.  As it turns out, what really happened that day isn’t really what happened.

Everyone has a different magic, and it seems like they come into their magic around puberty.  Well, mostly.  There is a character who gets magic way late.  I kind of wish we got more of that, because I thought that was pretty interesting.

The world was something that didn’t stand out, and I wish it did, because my mind is coming to a complete blank as far as how people are trained and what the world is like.

Her relationship with Ghoa was interesting, though I felt like we didn’t see enough of it.  Her relationship with Ghoa’s cousin was interesting as well.  I wish I could remember his name- I think it starts with an S, but that’s about it.  And Temujin…we see more of him with Enebish than any other character, and I was certain they would end up together.  I feel like there may be a love triangle in Enebish’s future.  I don’t think things with Temujin are over…

Honestly, I’m not sure what else to say about Night Spinner, so I’ll end with my rating.

3 stars.  I liked Night Spinner, but I wish I remembered more of it.  Still, I do want to know what happens next.