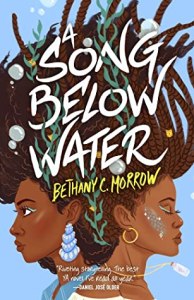 Book: A Song Below Water by Bethany C. Morrow

Series: A Song Below Water #1

Tavia is already at odds with the world, forced to keep her siren identity under wraps in a society that wants to keep her kind under lock and key. Never mind she’s also stuck in Portland, Oregon, a city with only a handful of black folk and even fewer of those with magical powers. At least she has her bestie Effie by her side as they tackle high school drama, family secrets, and unrequited crushes.

But everything changes in the aftermath of a siren murder trial that rocks the nation; the girls’ favorite Internet fashion icon reveals she’s also a siren, and the news rips through their community. Tensions escalate when Effie starts being haunted by demons from her past, and Tavia accidentally lets out her magical voice during a police stop. No secret seems safe anymore—soon Portland won’t be either.

I liked this one!  Not as much as I wanted to, and it took some time for me to get into it.

I struggled with this one, especially at first.  Don’t get me wrong, I’m glad we got to follow both Effie and Tavia, and how much they needed each other.  But I found Effie’s story particularly confusing at first, and for the life of me, I could not figure out why she was living with Tavia.  It didn’t make sense to me initially, though it became much more clear in the end.

I hated how people saw sirens, and how just the possibility that someone was a siren meant they deserved what happened to them.  It’s something we see throughout the book, and it made me both sad and angry to see how people were treated because of it.  It made me think of the Salem Witch Trials, but I’m sure there are a lot of comparisons/parallels you could draw.

I don’t blame Tavia for trying to remain silent and not give herself away.  We really see her struggle with that, and how her dad in particular worries about her and what will happen if people find out that she’s a siren.  You see that people are scared of others using their voice, and do whatever they can to make sure that people aren’t using their voice.  I hate that this is a world that Tavia lives in, and I especially hate that this is something we see in our current world.  Morrow does a really good job at combining racial injustice and police brutality with fantasy elements.

I love the take on sirens, though, and I love this alternate Portland.  It’s a world where sirens are real, and I can’t help but wonder what other mythological creatures are real, considering sprites and gorgons are mentioned, and we have sirens.  We get a little bit of the unique history in this book, and it makes me want to know more, because I really liked what we saw in this book.  Hopefully, we’ll get more in the next book.  Even though I know it won’t be as much as I probably want to know, I’ll take what I can get, and I’m curious to see what happens next for Tavia and Effie.

3 stars.  There are some things I really liked and even loved, but I definitely had a hard time getting into this book at first.