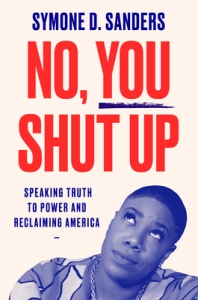 Book: No, You Shut Up: Speaking Truth To Power And Reclaiming America by Symone D. Sanders

In this rousing call to leadership, the self-described millennial spokesperson for the culture, CNN’s designated “woke AF” former commentator, and the youngest national press secretary in the history of the United States shares her take-no-prisoners approach to life, politics, and career success, and shows a new generation how to be loud and powerful in their own right.

Many people—most notably white older men—may try to stop Symone Sanders from speaking up and out. But Symone will NOT shut up. And neither should you. In this inspiring call-to-action, Symone tells stories from her own life of not-shutting-up alongside loud young revolutionaries who came before her to help you find your authentic voice and use it to your advantage; to fight ideological battles more effectively; and to resist those who try to silence you.

We are all gurus, masterminds, artists, entrepreneurs—we are the change agents we have been waiting for. IT IS US. And the time is RIGHT NOW. I know you’re wondering, “But HOW?” And we don’t have all the answers! Symone is the first to admit we’re all winging it in one way or another. But the point is we’re out there doing it. So get started. Open your mouth and start talking. Loudly.

No You Shut Up goes beyond the surplus of “Vote-Or-Die” books we’ve seen before. Because change doesn’t just happen at the ballot box. We need people fighting oppression, injustice, and inequality—in the workplace, on the cultural battlefield, in government, in every corner of the world. With spirited storytelling filtered through a voice that cannot and will not be ignored, Symone inspires you to start now. You don’t need to have all the answers, or wait your turn to help create the change you want to see. All you need is a new toolbox, an unshakable commitment, and the confidence and guidance to wield those tools effectively.

I wasn’t sure what to expect with No, You Shut Up, but it ended up being an okay read for me.

It’s part memoir, part call-to-action in politics.  I really enjoyed reading about Sanders time in politics, and what it was like to work on Bernie Sander’s campaign, and working as a commentator on CNN.  It was very clear she knew what she wanted, and went for it.  She didn’t have all the answers, but she wants things to change, and she refuses to stay quiet and shut up.  She’s determined, and finds really creative ways to get what she wants.  She doesn’t take no for an answer, she knows how to set boundaries and stick with them, and she asks for what she wants in clear and plain terms.

It’s clear that she believes that we can be better, that who we are is really important, and that we can, and should, have a role in shaping politics and getting involved in things.  Overall, it’s an interesting look at what it’s like to work on a campaign, but I don’t know that I could begin to tell you how to otherwise get involved in politics and change things by something other than voting or working on a campaign.

Personally, I would have liked something a little more concrete than that, but I felt like it was a good look at her own life in politics.  She shared a lot of stories from her own life, and I could tell that she wanted to make a difference and that she knew what she wanted to do.  She got as much experience as she could- she had a lot of internships, worked on different campaigns, and at different organizations, with each one expanding her skill set and getting her closer to what she wanted to do- work in politics.  She didn’t always get the job she wanted, but that didn’t stop her at all, and if anything, she worked harder to get where she wanted to be.

The book felt very conversational, like she was telling me what happened.  It’s a fast read, though I could only manage a chapter or two at a time.  She didn’t get bogged down in details, and it would be easy enough to read in a day or two.

Even though I thought it was okay, I still think it’s worth checking out.  Especially if, after the last four years, you want to be more involved, or want a peek at what it’s like to work in politics, particularly the Democratic party.

2 stars.  This was a book that I thought was okay, but I still liked reading about how Sanders got to where she is today.