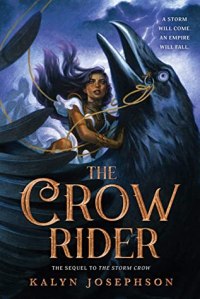 The thrilling conclusion to the epic Storm Crow duology that follows a fallen princess as she tries to bring back the magical elemental crows taken from her people.

Thia, her allies, and her crow, Res, are planning a rebellion to defeat Queen Razel and Illucia once and for all. Thia must convince the neighboring kingdoms to come to her aid, and Res’ show of strength is the only thing that can help her.

But so many obstacles stand in her way. Res excels at his training, until he loses control of his magic, harming Thia in the process. She is also pursued by Prince Ericen, heir to the Illucian throne and the one person she can’t trust but can’t seem to stay away from.

As the rebel group prepares for war, Res’ magic grows more unstable. Thia has to decide if she can rely on herself and their bond enough to lead the rebellion and become the crow rider she was meant to be.

I liked The Crow Rider!  After reading the first book for book club last year, I knew I wanted to read this book to see what happened next.

I think I just wanted more from the book, but I don’t know what.  We learn about an entirely new, mysterious group that no one thinks exists.  But not surprisingly, they really do exist.  It was even less of a surprise was that Thia was connected to them.  In this book, we see how special Thia and Res really are, and while it makes sense for this book, I wasn’t overly enthused about it.  If you hate the super-special chosen one trope, this is not the book for you.  I usually don’t mind it, but it really bothered me in this book, for some reason.

Everything with the crows and their magic felt really superficial, and I wanted more of that.  I wanted more of hatching the crow eggs and seeing them grow the way we saw it with Res.  It wasn’t going to happen until Razel was deal with, of course, and I know this series is about what happened to Rhodaire after they lost their crows.  But I felt like we barely got anything about them, which is weird considering the fact that they’re so important to Rhodaire and how Rhodaire functions.

With The Storm Crow, and with this book, I love how Josephson dealt with Thia’s depression.  It felt very real, and very natural, and I really liked seeing that over time.  I also really liked Res- though I didn’t love how he had all the powers, I thought Res was awesome, and he really had quite the personality.  He made it pretty clear what he thought and what he wanted.  And he does have a good bond with Thia.

In all honestly, this is a series that would have benefited from another book.  With two, things felt really rushed, and it would have been a really good bridge between The Storm Crow and a non-existent third book.  I think having some time to let things develop naturally would have been good.

Still, I’d recommend this duology for the depression representation and Res alone.

3 stars.  I liked The Crow Rider, but I also have some reservations about it.