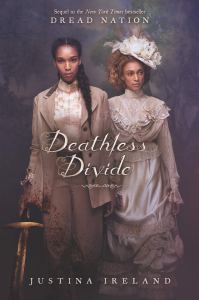 The sequel to Dread Nation is a journey of revenge and salvation across a divided America.

After the fall of Summerland, Jane McKeene hoped her life would get simpler: Get out of town, stay alive, and head west to California to find her mother.

But nothing is easy when you’re a girl trained in putting down the restless dead, and a devastating loss on the road to a protected village called Nicodermus has Jane questioning everything she thought she knew about surviving in 1880’s America.

What’s more, this safe haven is not what it appears – as Jane discovers when she sees familiar faces from Summerland amid this new society. Caught between mysteries and lies, the undead, and her own inner demons, Jane soon finds herself on a dark path of blood and violence that threatens to consume her.

But she won’t be in it alone.

Katherine Deveraux never expected to be allied with Jane McKeene. But after the hell she has endured, she knows friends are hard to come by – and that Jane needs her, too, whether Jane wants to admit it or not.

Watching Jane’s back, however, is more than she bargained for, and when they both reach a breaking point, it’s up to Katherine to keep hope alive – even as she begins to fear that there is no happily-ever-after for girls like her.

I liked Deathless Divide, but not as much as Dread Nation.

So, this book picks up where Dread Nation left off, and we follow Jane and Katherine after leaving Summerland.  Both Jane and Katherine narrate, which was a good thing, because they do get separated.  But I didn’t care for Katherine’s half of the book, and I spent her chapters wishing we could get back to Jane’s story.

I was a lot more interested in Jane’s story, and I think it’s because we follow her in the first book.  I didn’t particularly care about Katherine, or what happened to her.

The two narrators are a big reason why I didn’t love this book.  It was hard to stay interesting when I only cared about reading one of the characters.  Not only that, but I thought the first book was pretty well resolved, and I didn’t particularly care about what happened after.  Don’t get me wrong, I’m glad I read this book, and I’m glad that I got to see what happened after the first book ended.  I just didn’t care as much as I thought I would.

I struggled to get through this book.  I was bored for a lot of it, and it was really hard to concentrate on this book.  I haven’t been in a reading mood lately, so that’s part of it.  I wanted more action, and I didn’t really get it in this book.

I really like the premise, and how zombies blend with U.S. history.  I’m glad we got to see more of the world Jane and Katherine live in, because it is one I would not want to live in.  I’m not sure if I’d read another book in this series, if there is going to be another one.  Maybe one day, but I also wouldn’t be rushing out to get it.

3 stars.  I liked Deathless Divide, but I had a hard time getting into it.