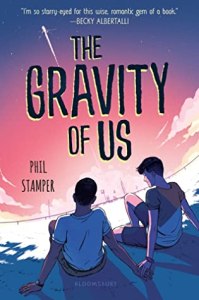 Book: The Gravity Of Us by Phil Stamper

In this smart, heart-warming YA debut perfect for fans of Becky Albertalli and Adam Silvera, two teens find love when their lives are uprooted for their parents’ involvement in a NASA mission to Mars.

Cal wants to be a journalist, and he’s already well underway with almost half a million followers on his FlashFame app and an upcoming internship at Buzzfeed. But his plans are derailed when his pilot father is selected for a highly-publicized NASA mission to Mars. Within days, Cal and his parents leave Brooklyn for hot and humid Houston.

With the entire nation desperate for any new information about the astronauts, Cal finds himself thrust in the middle of a media circus. Suddenly his life is more like a reality TV show, with his constantly bickering parents struggling with their roles as the “perfect American family.”

And then Cal meets Leon, whose mother is another astronaut on the mission, and he finds himself falling head over heels–and fast. They become an oasis for each other amid the craziness of this whole experience. As their relationship grows, so does the frenzy surrounding the Mars mission, and when secrets are revealed about ulterior motives of the program, Cal must find a way to get to the truth without hurting the people who have become most important to him.

I really liked The Gravity Of Us!  I was intrigued, of course, but also not sure if I would like it.  I am so glad I picked this book up!

I really liked Cal, and what I felt for him.  Especially with everything that happened with Kiera, who seemed so cool at first.  But she ended up not being as cool as I thought she would be, and what she did was pretty horrible.  And his life changed because of his dad’s desire to be an astronaut.  Who didn’t want to be an astronaut as a kid, though?

Life definitely wasn’t perfect in Houston, and not how reality t.v. made it seem.  He made fast friends with Leo and Kat, and overall, I liked seeing how the whole community came together to make the Mars mission happen.  There were a lot of ups and downs, of course, and Star Watch really took things out of context.  That wasn’t surprising at all, and it felt very realistic.  I loved how Cal stood up for Mrs. Bannon, and that overall, he wanted people to see things how they really were.  I’d definitely follow Cal, if he were a real person.

I loved that it was about keeping NASA funded and getting to Mars!  I don’t pay attention to NASA enough, but with reading this book, I felt really excited that they got to see people travel to Mars!  I can’t help but wonder if that’s what it was like when we went to the moon decades ago.

I really liked seeing that Cal’s family wasn’t perfect.  Leo’s family wasn’t perfect either, but I felt like this book really highlighted that things aren’t what they seem, and that we put people on a pedestal only to tear them down.  It was sad that this mission almost lost funding because of some things that came out about this particular mission.

Cal worked so hard to make things right, and it really made me believe in this mission and what they were trying to do.  There were so many people involved in making this happen, and I didn’t want anyone to lose their dream or their job because of some pretty terrible people.

I thought the romance was really cute, and I like Leo and Cal together.  I really hope it works out for them and that Leo figures out what he wants to do.  I’m also hoping things work for Cal, and that he gets to be the journalist he wants to be.

4 stars.  I really liked The Gravity Of Us, and I really recommend it, especially if you like cute romances or space!

2 thoughts on “Book Review: The Gravity Of Us by Phil Stamper”