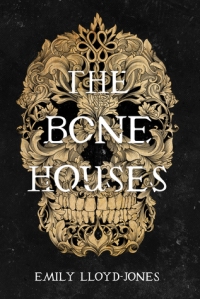 Seventeen-year-old Aderyn (“Ryn”) only cares about two things: her family, and her family’s graveyard. And right now, both are in dire straits. Since the death of their parents, Ryn and her siblings have been scraping together a meager existence as gravediggers in the remote village of Colbren, which sits at the foot of a harsh and deadly mountain range that was once home to the fae. The problem with being a gravedigger in Colbren, though, is that the dead don’t always stay dead.

The risen corpses are known as “bone houses,” and legend says that they’re the result of a decades-old curse. When Ellis, an apprentice mapmaker with a mysterious past, arrives in town, the bone houses attack with new ferocity. What is it that draws them near? And more importantly, how can they be stopped for good?

Together, Ellis and Ryn embark on a journey that will take them deep into the heart of the mountains, where they will have to face both the curse and the long-hidden truths about themselves.

The Bone Houses was just okay for me.

I was intrigued by the world Ryn lives in.  She’s a gravedigger in a world where the dead don’t stay dead.  That’s not a job I would want but especially knowing those die might not stay dead.  There’s magic and she comes across an interesting encampment in the forest, and there was something about the setting that felt like it happened long ago.  It felt very European to me, though I couldn’t begin to guess what time period this book would be set in.

I wonder where they came up with bone houses.  I mean, they obviously have to be called something, but why bone houses?  It’s an interesting way of calling them zombies.  That’s what they remind me of, but I’m not sure if that’s what Lloyd-Jones was going for with them.

I’m not surprised that it was because of a curse that happened ages ago, or that Ellis was connected to it all.  It was either him or Ryn, and he did make more sense because it happened around the time he got close to where Ryn lives.  She is a pretty good guide, I’ll give her that.  Especially where the forest is concerned.

I also wasn’t surprised that there something between Ellis and Ryn.  Personally, I didn’t feel it, but given this is one book, and there were other things going on…let’s just say it felt like the romance took a backseat to everything else going on.

And I was bored.  I kept waiting for something to happen, but it was until we were getting to the end of the book that things start getting more action-packed.  Like with so many other books that end up being okay, it wasn’t a total loss.  I mean, I did keep reading to see what would happen, and what was going on.  But I was never completely pulled in or invested in what was going on either.  There were a couple of points where I wasn’t sure if I was going to finish the book, but I did want to see how things would work out.

2 stars.  The Bone Houses was just okay, and it wasn’t for me.