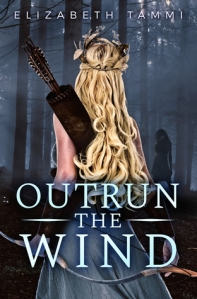 The Huntresses of Artemis must obey two rules: never disobey the goddess, and never fall in love. After being rescued from a harrowing life as an Oracle of Delphi, Kahina is glad to be a part of the Hunt; living among a group of female warriors gives her a chance to reclaim her strength, even while her prophetic powers linger. But when a routine mission goes awry, Kahina breaks the first rule in order to save the legendary huntress Atalanta.

To earn back Artemis’s favor, Kahina must complete a dangerous task in the kingdom of Arkadia— where the king’s daughter is revealed to be none other than Atalanta. Still reeling from her disastrous quest and her father’s insistence on marriage, Atalanta isn’t sure what to make of Kahina. As her connection to Atalanta deepens, Kahina finds herself in danger of breaking Artemis’ second rule.

She helps Atalanta devise a dangerous game to avoid marriage, and word spreads throughout Greece, attracting suitors willing to tempt fate to go up against Atalanta in a race for her hand. But when the men responsible for both the girls’ dark pasts arrive, the game turns deadly.

I thought Outrun The Wind was just okay.  I wanted to like it more, but I had a really hard time getting into it.

I was bored the entire time I was reading the story.  If you’re looking for any action, this is not the book for you.  It moved at what felt like a snail’s pace, and I had a hard time staying interested in the book.  I wanted something more to happen, and it didn’t.

I liked the setting, though.  Kahina’s world is one where gods and goddesses roam the earth, and are living, breathing people.  It’s too bad we only got a glimpse of Artemis, but this book wasn’t about her- it was about Kahina and Atalanta.  I’ve heard of Atalanta, but I don’t know her story, so I can’t speak to this book as a re-telling of her story.  I felt like I was in Ancient Greece the entire time, and though the setting didn’t feel like an additional character, I think the world was still one I wanted to spend more time in.

I don’t know how I feel about Kahina or Atalanta.  I didn’t feel particularly interested in their stories or what happened to them, and I wish their backstories felt a little more clear.  Their pasts felt really muddled, and we get some tidbits about what happened, but it seemed a little fuzzy to me.  Maybe I just wasn’t paying enough attention.

It seemed like it was supposed to be a romance, but I didn’t pick up on that at all.  The description made it seem like there was going to be romance involved, but it felt like they went from enemies to friends and never quite made it beyond friends.  Unless I’m massively missing out on something, and I’m completely and utterly clueless.  Maybe I just need to be hit over the head with it, because any romantic connection that was in this book went over my head.

Kahina and Atalanta just didn’t feel completely fleshed out to me, though I felt like we knew Kahina a little bit better.  Atalanta felt a little more guarded and closed off, but I still feel like we didn’t get to know them as much as we could have.  Maybe that’s why I felt like they never moved past the friends stage.

2 stars.  Outrun The Wind was okay, and I wanted to like it more than I really did.  It wasn’t for me, but if you like Greek mythology, this might be worth checking out.