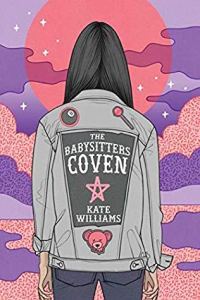 Expected Publication Is September 17, 2019 by Delacorte Press|Expected Number Of Pages: 368

Adventures in Babysitting meets Buffy the Vampire Slayer in this funny, action-packed novel about a coven of witchy babysitters who realize their calling to protect the innocent and save the world from an onslaught of evil.

Seventeen-year-old Esme Pearl has a babysitters club. She knows it’s kinda lame, but what else is she supposed to do? Get a job? Gross. Besides, Esme likes babysitting, and she’s good at it.

And lately Esme needs all the cash she can get, because it seems like destruction follows her wherever she goes. Let’s just say she owes some people a new tree.

Enter Cassandra Heaven. She’s Instagram-model hot, dresses like she found her clothes in a dumpster, and has a rebellious streak as gnarly as the cafeteria cooking. So why is Cassandra willing to do anything, even take on a potty-training two-year-old, to join Esme’s babysitters club?

The answer lies in a mysterious note Cassandra’s mother left her: “Find the babysitters. Love, Mom.”

Turns out, Esme and Cassandra have more in common than they think, and they’re about to discover what being a babysitter really means: a heroic lineage of superpowers, magic rituals, and saving the innocent from seriously terrifying evil. And all before the parents get home.

I liked The Babysitter’s Coven but like a lot of the books I’ve read this year…I didn’t like it as much as I wanted to.

For some reason, the book felt like it should have been middle grade and not YA  I kept forgetting that the characters were around 17, and it would be interesting to see this book as a middle grade series.

Esme wasn’t always my favorite character, and Cassandra wasn’t either, but maybe they’ll grow me, should I pick up the sequel.  I’m not sure if I will but we’ll see when the next one comes out.  I did like Janis, though.  And I did like the backstory for Esme’s mom.  It wasn’t what I was expecting but I did like it.  Pig was great too, and it’s so hard not to love.

I was expecting expecting babysitting to have more of a connection to the weird goings-on.  It would make a great cover but it didn’t go that way at all.  Still, it was fun to see what adventures they got themselves into, and I liked seeing them try to figure things out with pretty much no information.

I do wish they struggled a little more than they did, because things were pretty easy for both Esme and Cassandra.  They did figure things out pretty fast, and they seemed to do things really well after practicing a handful of times.  I think it would have made their achievements a lot more fun and it would have been a little easier to root for them.  But maybe that’s just me.

There was this 90’s teen movie vibe to it, which was fun.  Now that I think about it, I can totally see this book being a Disney channel series/original movie.  It would be pretty fun to watch, and it’s certainly light and fluffy enough to work well as a movie or tv show.

The outfits sounded pretty cool too, and that, more than anything, made me think of the outfits that Stacy and Claudia would wear in the BSC.  Which I now feel like reading, by the way.  A movie would bring the outfits to life, and it would be pretty cool to actually see the outfits.

3 stars.  I liked The Babysitter’s Coven, but I honestly thought it sounded younger than I expected.  It was a fun read but I had my issues with it too.