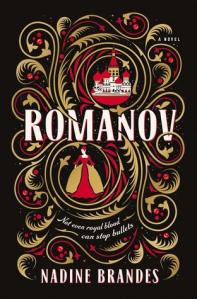 Expected Publication Is May 7, 2019 by Thomas Nelson|Expected Number Of Pages: 352

Where I Got It: I received Romanov as an e-ARC from netgalley.com in exchange for a fair and honest review

From the author of Fawkes comes a magical take on the story of Anastasia Romanov.

The history books say I died.

They don’t know the half of it.

Anastasia “Nastya” Romanov was given a single mission: to smuggle an ancient spell into her suitcase on her way to exile in Siberia. It might be her family’s only salvation. But the leader of the Bolshevik army is after them . . . and he’s hunted Romanov before.

Nastya’s only chances of saving herself and her family are either to release the spell and deal with the consequences, or to enlist help from Zash, the handsome soldier who doesn’t act like the average Bolshevik. Nastya’s only dabbled in magic, but it doesn’t frighten her half as much as her growing attraction for Zash. She likes him. She thinks he might even like her…

That is, until she’s on one side of a firing squad…and he’s on the other.

I liked Romanov, but not as much as I wanted to.  After reading Fawkes, I was pretty excited about this one, but I struggled to get through this book.

It’s a little sad, because the idea is really cool.  It’s a different take on the Anastasia story, but the book started off really slow.  It didn’t pick up the her family is executed, and that’s when Romanov got interesting.  That’s where I’m torn, because on the one hand, it took too long, with too many details before things started moving along.

At the same time, having that background did give some insight into what was going at the time.  So while starting right before the execution would have started things off with a bang, I think we also might have missed out on a lot.  Unless Brandes found a way to include in the book, through flashbacks or something.

I really liked how she included magic with history.  I wish we had more about the history of magic in Russia and how it was used.  I had the same issue with her other book, and it’s the execution of the Romanov family plus Anastasia surviving plus magic, sort of like how Fawkes was the Gunpowder plot but with magic.

We all know how people have claimed to be Anastasia over the years, and how two bodies were quite a bit away from the rest of the family, and this book has a really interesting and magical explanation for that.  It’s certainly an interesting way to have Anastasia survive, and I liked how that was included in the story.

Brandes is really good at re-telling history with magic.  While I wanted more details about the magical aspects, and how it exists in this world, I liked that it was just a normal part of Nastya’s world.  I can’t wait to see what else she comes up, and what part of history she’ll re-tell next.

My Rating: 3 stars.  It took a long time for this book to get going, but I did like it, and how she re-told this story.

One thought on “ARC Book Review: Romanov by Nadine Brandes”