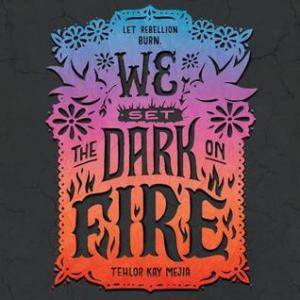 Book: We Set The Dark On Fire by Tehlor Kay Mejia, Narrated by Kyla Garcia

Where I Got It: I borrowed the audio book from the library

Series: We Set The Dark On Fire #1

At the Medio School for Girls, distinguished young women are trained for one of two roles in their polarized society. Depending on her specialization, a graduate will one day run a husband’s household or raise his children, but both are promised a life of comfort and luxury, far from the frequent political uprisings of the lower class. Daniela Vargas is the school’s top student, but her bright future depends upon no one discovering her darkest secret—that her pedigree is a lie. Her parents sacrificed everything to obtain forged identification papers so Dani could rise above her station. Now that her marriage to an important politico’s son is fast approaching, she must keep the truth hidden or be sent back to the fringes of society, where famine and poverty rule supreme.

On her graduation night, Dani seems to be in the clear, despite the surprises that unfold. But nothing prepares her for all the difficult choices she must make, especially when she is asked to spy for a resistance group desperately fighting to bring equality to Medio. Will Dani cling to the privilege her parents fought to win for her, or to give up everything she’s strived for in pursuit of a free Medio—and a chance at a forbidden love?

I liked We Set The Dark On Fire!  I’m looking forward to seeing what happens next, but I definitely have some mixed feelings.

I really felt for Dani, and what she was trying to protect.  She has to make a lot of hard choices, but I did find myself wishing that we had more with her parents.  I know she wanted to protect her secret, that her parents gave up everything so she could do better, but I never really felt like that was in danger of being revealed.  I felt like her joining the Resistance, and her falling in love with Carmen was more at stake than sacrificing what her parents did.

I really wanted to know more about the school she went to, and how it was decided who was Primero and who was Segundo.  I really wanted to know that.  It was easy enough with Handmaid’s Tale- Handmaidens were the ones who could still bear children, while wives sometimes could not.  But I wasn’t sure how it decided- if it was explained, I clearly missed it.

So, I did listen to the audio book, which I think didn’t help with the world building.  The narrator, Kyla Garcia was really great, and she did an awesome job narrating.  I loved her narration of Joyride by Anna Banks, but having finished this one, I don’t think it completely worked on audio.  At least for me.  There were details, like who was Primero and who was Segundo that were either left out, or completely forgettable.  There were quotes from the guide that the Medio School For Girls had, and they were completely forgettable as well.  I didn’t mind them, but for audio, it didn’t work.

And there was this story at the beginning of the book that explained how the world came to be.  I liked it, but by the end of the book, I had completely forgotten what it was about.  I think that’s what made me think of The Belles.

The idea was interesting, and I liked a Handmaid’s Tale-type story in a fantasy setting.  It’s not at all a Handmaid’s Tale re-telling but it was the only thing I could think of the entire time I was reading this book.  That is partly why I picked this book up, and I did like it.  The world and characters are interesting, and I do want to know where the story is headed.  I think this is the one time that a comparison to another book is dead-on.

I didn’t really care about Carmen, but I did like Dani.  I can’t say I’m surprised by some of the things that happened between them, but I did want to keep listening to see if any of my guesses were right.  It was fairly predictable, but I didn’t mind.  I liked the overall story enough that I didn’t mind the predictability.

3 stars.  If you love the Handmaid’s Tale, you really like this book.  It reminded me way too much of the Handmaid’s Tale for me to love this book, and it’s similarity to it made it hard to see it as a separate book.  Still, I liked the world and the story enough that I want to know what happens next.