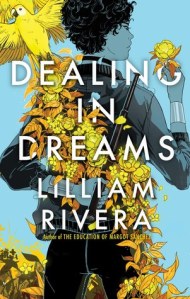 Expected Publication Is 3/05/2019 by Simon & Schuster Books For Young Readers|Expected Number Of Pages: 352

At night, Las Mal Criadas own these streets.

Sixteen-year-old Nalah leads the fiercest all-girl crew in Mega City. That role brings with it violent throwdowns and access to the hottest boydega clubs, but Nalah quickly grows weary of her questionable lifestyle. Her dream is to get off the streets and make a home in the exclusive Mega Towers, in which only a chosen few get to live. To make it to the Mega Towers, Nalah must prove her loyalty to the city’s benevolent founder and cross the border in a search of the mysterious gang the Ashé Riders. Led by a reluctant guide, Nalah battles crews and her own doubts but the closer she gets to her goal the more she loses sight of everything—and everyone—she cares about.

Nalah must choose whether or not she’s willing to do the unspeakable to get what she wants. Can she discover that home is not where you live but whom you chose to protect before she loses the family she’s created for good?

I liked this one!  I really liked The Education Of Margot Sanchez when I read it a couple of years ago, and I was looking forward to reading this one.

I wish I liked it more than I did, but it’s definitely an interesting read.  I thought the world was really different- it’s ruled by women, and girl gangs are in charge in Mega City and the world beyond it.  This is a world where winning fights means you move up the ranks,  I don’t think I remember seeing many, if any men in this book.  They are very much in the background, and low on the totem pole.  It’s an interesting role reversal- the women are violent and powerful, and I think it could have been easy to have it be the complete opposite.

I had a hard time with the world.  We’re thrown into Nalah’s world and I wanted to know more about how the world came to be.  Why were the women ruling things?  What happened that Mega City seemed to be closed off and dealing dreams?  I had so many questions about the world, and they weren’t answered.  Everything was just there, and not really explained.  I wanted to know why things were the way they were, and I really felt like the sueño tabs weren’t used as much as they could have been.  It helps people sleep, but they end up being really addicted to it.  Since Nalah’s group didn’t use it, we only got glimpses of what it did.

I did have trouble keeping the different gangs apart, especially at first.  It was the same for the characters.  While I was able to keep up by the end of the book, it did take a while.

Dealing In Dreams is also in first-person, which didn’t work for this particular book.  At least for me.  I don’t mind it but I think we were in Nalah’s head a little too much.  I don’t know that multiple narrators would have fit with this story but it could have been interesting to get another perspective on things.  The writing didn’t work for me- it seemed a little stilted but maybe it’s because it’s first-person?  Maybe I’ll have to try it on audio, because it seems like it would work really well as an audio book.

I know it seems like I didn’t like Dealing In Dreams, but I did!  Thinking about it now, I think my issues with the book was a combination of not completely paying attention to the book, wanting a little more from the world-building and characters, and thinking it’s better suited to audio.  But I liked seeing what was going on in this world.  I don’t think I’ve seen anything quite like this book, and I do mean that in a good way.

I think the one thing I truly disliked was the ending.  It just sort of ended, and I was confused because it seemed like there should have been more resolution.  I was even more surprised that this book seems to be a stand-alone.  I assumed that it was the first in a series- which would explain the ending and the fact that I didn’t get the details I wanted.  There’s not a lot of room for explaining every single thing in a stand-alone.  There’s definitely room for another book set in this world.

3 stars.  I did like Dealing In Dreams, and I loved the role reversal in the book.  I really liked the world, but I did finish the book wanting more.  Maybe we’ll get lucky, and see another book set in this world.