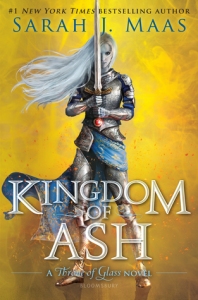 Years in the making, Sarah J. Maas’s #1 New York Times bestselling Throne of Glass series draws to an epic, unforgettable conclusion. Aelin Galathynius’s journey from slave to king’s assassin to the queen of a once-great kingdom reaches its heart-rending finale as war erupts across her world…

Aelin has risked everything to save her people―but at a tremendous cost. Locked within an iron coffin by the Queen of the Fae, Aelin must draw upon her fiery will as she endures months of torture. Aware that yielding to Maeve will doom those she loves keeps her from breaking, though her resolve begins to unravel with each passing day…

With Aelin captured, Aedion and Lysandra remain the last line of defense to protect Terrasen from utter destruction. Yet they soon realize that the many allies they’ve gathered to battle Erawan’s hordes might not be enough to save them. Scattered across the continent and racing against time, Chaol, Manon, and Dorian are forced to forge their own paths to meet their fates. Hanging in the balance is any hope of salvation―and a better world.

And across the sea, his companions unwavering beside him, Rowan hunts to find his captured wife and queen―before she is lost to him forever.

As the threads of fate weave together at last, all must fight, if they are to have a chance at a future. Some bonds will grow even deeper, while others will be severed forever in the explosive final chapter of the Throne of Glass series.

I was so nervous going into this book.  I wasn’t sure how Maas would tie everything together but I ended up really liking it.

This was a great way to end the series, and I can’t believe it’s over!  I loved seeing everyone try to fight Erawan, and seeing what was going on with Dorian, Manon and Aelin.  I really loved seeing what happened to Manon and the Thirteen, and I really loved how much Manon changed.  I think, to a degree, Manon’s story was what I wanted Aelin’s to be.  I don’t know why, but I really liked Manon’s story, and she’s pretty awesome.  I felt so protective of Abraxos, and Manon is lucky to have him!

There’s a lot that needed to be wrapped up, and I think it could have been condensed just a little bit.  It felt really long (it is just under 1000 pages, so it makes sense) and it felt a little long and drawn out at times.  Even with re-reading most of the series (I skipped Tower of Dawn just because I wasn’t in the mood to read it), I had a hard time remembering everything that happened.  It was a little hard to keep up with everything going on, and I wish each person we followed sounded a little more distinct.  It always took a while to figure who was where, and who we were following.

I really felt for Aelin, especially with everything that happened with Maeve and Chairn.  Though Tower Of Dawn is my least favorite book in the series, a lot of what happens in this book makes a lot more sense.  It did set up some of what we see in this book, and maybe, one day, I’ll re-read it.  Aelin really does withdraw into herself in this one, and I don’t blame her.  She’s really changed from the Aelin we see in Throne Of Glass, and while her arc isn’t my favorite, it’s been an interesting journey to see her become queen of Terrasen.  And like Tower Of Dawn, I hated that her scars were magically gone after her time with Maeve.  I don’t know why it bothers me so much, but that was one of my least favorite things about the book.

With as long as this book is, I feel like I don’t have a lot to talk about.  It wrapped the series up pretty well, and I obviously don’t love as much as everyone else seems to, but I really did enjoy the book and catching up with everyone, even though there were a few moments that broke my heart and had me sobbing.

4 stars.  I really liked it, and it’s a really good ending to the series.  It was a little too long, but Maas did a great job at wrapping up everyone’s stories.