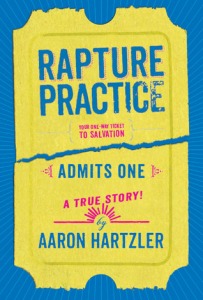 What happens when the person you’re becoming isn’t the one your family wants you to be?

When Aaron Hartzler was little, he couldn’t wait for the The Rapture: that moment when Jesus would come down from the clouds to whisk him and his family up to heaven. But as he turns sixteen, Aaron grows more curious about all the things his family forsakes for the Lord. He begins to realize he doesn’t want Jesus to come back just yet—not before he has his first kiss, sees his first movie, or stars in the school play.

Whether he’s sneaking out, making out, or playing hymns with a hangover, Aaron learns a few lessons that can’t be found in the Bible. He discovers that the girl of your dreams can just as easily be the boy of your dreams, and the tricky part about believing is that no one can do it for you.

In this funny and heartfelt coming-of-age memoir, debut author Aaron Hartzler recalls his teenage journey from devoted to doubtful, and the search to find his own truth without losing the fundamentalist family who loves him.

I can’t remember how I first heard about Rapture Practice- which, now that I think about, describes probably 99% of the books I wanted to read- but I was in the mood for non-fiction and a memoir, and it seemed interesting enough.

I was surprised that it’s a YA memoir.  I wasn’t expecting it, but looking back, it makes sense, considering it focuses on Hartzler’s life in high school.  It’s pretty easy to read, and it goes by pretty fast.  It did feel like I reading little snippets of his life, and while it tells a pretty linear, cohesive story, I wish it had gone into a little more depth.  I feel like he has a lot more of his to share but his high school years did give the book a certain focus.

I will say that there were points where I didn’t want to finish the book, and it was because of his parents.  I felt so angry at them for not being more open, and for how they treated Aaron.  I mean, I know he did rebel, and did things they didn’t want him to, but they were really, insanely strict.  When I hear someone describe themselves as a Christian, his parents are what immediately pop into mind.  I know not all Christians are like Hartzler’s parents, but they are what I associate with Christian.

Still, as frustrating as it was to read his parents, I am glad I read Rapture Practice.  It is a perspective that I don’t pay a lot of attention to, and even though I disagree with a lot of his parents beliefs, I’m still glad I read Rapture Practice.  I don’t know that I came away with a better understanding of why they believe what they do, but I can definitely relate to Hartzler starting to question his beliefs and faith.  Questioning ourselves, our beliefs and what our families believe is something I think we can all relate to, regardless of our faith (or lack of it).

I really wish there was some sort of afterword or epilogue or something where we get a little about about what happened after he graduated high school.  Some sort of conclusion would have been nice, but it did wrap things up pretty nicely.  Overall, I liked it, even though there were some things I wasn’t thrilled with, which I already talked about.

I felt for Aaron, and I can’t imagine having to sneak around to see ANY movie, or to hide listening to music because they’re not Christian enough.  One of the things I liked about the book was seeing him figure things out, and realizing that what he wanted to do and what he believed didn’t match up with what his parents believed.  I didn’t always agree with Aaron’s choices, but I can understand why he did what he did.  I had a much harder time doing that with his parents, but Aaron was definitely trying to figure things out for himself, which is a part of life.

3 stars.  I had some reservations about Rapture Practice, but it was an interesting read.