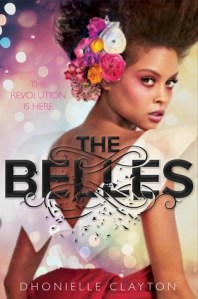 Book: The Belles by Dhonielle Clayton

Camellia Beauregard is a Belle. In the opulent world of Orléans, Belles are revered, for they control Beauty, and Beauty is a commodity coveted above all else. In Orléans, the people are born gray, they are born damned, and only with the help of a Belle and her talents can they transform and be made beautiful.

But it’s not enough for Camellia to be just a Belle. She wants to be the favorite—the Belle chosen by the Queen of Orléans to live in the royal palace, to tend to the royal family and their court, to be recognized as the most talented Belle in the land. But once Camellia and her Belle sisters arrive at court, it becomes clear that being the favorite is not everything she always dreamed it would be. Behind the gilded palace walls live dark secrets, and Camellia soon learns that the very essence of her existence is a lie—that her powers are far greater, and could be more dangerous, than she ever imagined. And when the queen asks Camellia to risk her own life and help the ailing princess by using Belle powers in unintended ways, Camellia now faces an impossible decision.

With the future of Orléans and its people at stake, Camellia must decide—save herself and her sisters and the way of the Belles—or resuscitate the princess, risk her own life, and change the ways of her world forever.

I was really looking forward to reading The Belles, especially since I really liked the Tiny Pretty Things series.  It’s really worth reading, and I really liked it.

I almost said that I really enjoyed it, but the word enjoyed somehow doesn’t seem like the right word.  I think it’s because the book was a lot darker than I ever expected.  I guess you could say it’s fantasy, but for some reason, I also got this whole dystopian vibe from it.  Which is strange, considering that dystopia (at least for me) always leans towards sci-fi and technology, and this book very much relies on magic and gods and goddesses, which is more fantasy than sci-fi.  It should be interesting to see how the book turns out genre-wise, because I think it could be an interesting combination for the rest of the series if there are elements of fantasy and dystopia.

I did picture a fictional New Orleans- which is probably because Camellia lives in a place called Orleans.  It’s like Victorian England meets New Orleans on either an island or a city right on the water.  I could picture everything pretty well, and it seems pretty vivid.

I was both fascinated and horrified by the descriptions of Camellia’s work with her clients.  It’s really descriptive, so I could see it really clearly.  It’s fascinating what people will do to be seen as beautiful but at the same time, it was horrifying because the people who make appointments with Camellia will do anything to be seen as beautiful.  Beauty really is subjective, and Clayton does an amazing job at showing that and how beauty standards can change.

It did start off slow, but it does pick up.  Things seem so innocent at first, but once you learn how the Belles came to be, and the further you get into the world, the less innocent it seems.  It’s a dark world, and yet, there are so many secrets.  We do learn some of them, but I feel like there’s a lot more to this world than we see.

I’m actually really excited about reading the rest of the series, because I want to know more about what’s going.  It’s going to be a long wait, but at least I can re-read The Belles in the meantime.

4 stars.  The Belles, while I really liked it, wasn’t quite a 5 star read for me.  I recommend it, and it’s a great book, but it just didn’t have that something that would get 5 stars.  Which does make me a little sad, because something about Camellia’s world was very, very familiar to me.

2 thoughts on “Book Review: The Belles by Dhonielle Clayton”