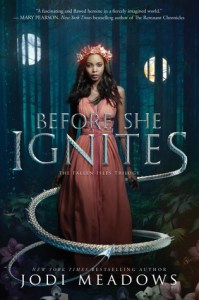 Book: Before She Ignites by Jodi Meadows

From the New York Times bestselling co-author of My Lady Jane comes a smoldering new fantasy trilogy perfect for fans of Victoria Aveyard and Kristin Cashore about a girl condemned for defending dragons and the inner fire that may be her only chance of escape.

Mira has always been a symbol of hope for the Fallen Isles, perfect and beautiful—or at least that’s how she’s forced to appear. But when she uncovers a dangerous secret, Mira is betrayed by those closest to her and sentenced to the deadliest prison in the Fallen Isles.

Except Mira is over being a pawn. Fighting to survive against outer threats and inner demons of mental illness, Mira must find her inner fire and the scorching truth about her own endangered magic—before her very world collapses.

And that’s all before she ignites.

I was really excited about Before She Ignites, especially since I loved her Incarnate series.  There are dragons, and how can you not love books about dragons?

I could definitely relate to the anxiety Mira feels, and while she counts a lot, it seemed to calm her down.  I don’t know anything about OCD, but the counting seemed more like a way to relieve anxiety than anything else.  I liked seeing how well-written it was, and how she had to deal with crippling anxiety at one of the worst points of her life. Mira really is more than the pretty face that the Council wants her to be, and she is an amazing character.  She’s strong and thoughtful and determined to go back for the people in the Pit.  I also liked that she wasn’t magically cured by the end of the book.  It could still go that way, of course, but I hope it doesn’t.  I want to see her continue to deal with her anxiety and her panic attacks.

I have mixed feelings about the whole timeline.  There was a lot of jumping around in terms of time.  On the one hand, I did really like it.  It gave a lot of insight into Mira, and how she became friends with her bodyguard, the dragon trainer, and two dragons in particular.  You learn how she ended up in prison, and that is important.  But at the same time, I didn’t like it, because it was hard to keep up with at first, and you’d have chapters where it would 7 months earlier, then present time, and then 10 years already.  So the past isn’t exactly linear, which didn’t completely work for me.  It worked well enough, but I didn’t completely love it either.

At first, it wasn’t clear who betrayed her, and I thought maybe it was her two friends or her family.  It turned out not to be the case, but I thought it was boring, who really betrayed Mira.

And how did the Luminary Council have so much control over Mira’s life?  If her father wrote the treaty, and named it after her, why did they have so much control?  It makes no sense, and I feel like things and places and events were mentioned but not completely explored.  I really wanted to know more about the politics of the area and about her family as well, but that wasn’t really explored either.  With two more books to go, I’m hopeful that we’ll get more of the world and what’s going on.  Also, the noorstones and how they were used didn’t make any sense to me.  That seemed more confusing than everything else put together.

Dragons!  I loved Mira’s relationship with the dragons.  They’re clearly important to her, and it seems like they’re very important to the world she lives in as well.  I wonder if the dragons help ease her anxiety.  She did seem more comfortable around them than anyone else.  My other theory is that the abilities we see her display are somehow connected to the dragons.  I don’t think she’s a dragon or anything like that, but I wonder if there is some sort of bond or something really special between Mira and the dragons.  It’s a feeling I have, and I think that it could be interesting to explore.  I want to see more dragons.

And that cover!  It’s beautiful, and it’s not often I want to frame the cover of a book, but this is one of them.  That cover is absolutely amazing, and I can’t stop looking at it.

At first, I thought that there would be quite a bit of romance.  But there really wasn’t any, and I feel like a lot of authors would have gone in the love triangle direction- with Mira, her bodyguard, and the guy in the cell next to her. But I’m glad we don’t really get any of that.  I suppose it’s still possible, but I feel like it maybe would have been introduced if that there the case.  I do feel like there’s enough going on without the romance, but I doubt that’s going to happen.

4 stars.  I really liked it, especially Mira’s anxiety.  That part was really well-done, but I wish we got more world-building and more of an explanation of the political system.

2 thoughts on “Book Review: Before She Ignites by Jodi Meadows”