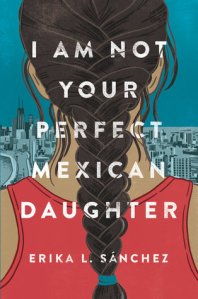 Book: I Am Not Your Perfect Mexican Daughter by Erika L Sanchez

But Julia is not your perfect Mexican daughter. That was Olga’s role.

Then a tragic accident on the busiest street in Chicago leaves Olga dead and Julia left behind to reassemble the shattered pieces of her family. And no one seems to acknowledge that Julia is broken, too. Instead, her mother seems to channel her grief into pointing out every possible way Julia has failed.

But it’s not long before Julia discovers that Olga might not have been as perfect as everyone thought. With the help of her best friend Lorena, and her first kiss, first love, first everything boyfriend Connor, Julia is determined to find out. Was Olga really what she seemed? Or was there more to her sister’s story? And either way, how can Julia even attempt to live up to a seemingly impossible ideal?

I really liked I’m Not Your Perfect Mexican Daughter.  I could relate to Julia, and how she felt like no one accepted her for who she was.  I can also relate to how everyone wanted to her be someone else, and to live up to the memory of her older sister.  Granted, I have no siblings, but there were a lot of times where I really related to Julia.

Her family seemed really different after the death of Julia, which isn’t surprising because that’s a huge thing to happen.  If there was no effect on the characters, I’d be slightly worried.  The mom did act like how I thought she would- unable to deal with it by staying in bed all the time, but eventually getting out of bed and turning her attention to her other daughter.

One thing I thought was odd was when Julia ended up in the hospital.  One minute, she’s taking a walk, and the next thing you know, she’s waking up in the hospital.  It was really confusing, and I did find myself reading the end of the one chapter and beginning of the other one multiple times to see if I could figure out what was going in.  It didn’t make sense at first, and I thought maybe part of it somehow didn’t end up in the e-book or if I was massively missing something.

We later learn what happened in between those two moments, so it was definitely a decision on the author’s part to have things be fine one minute, and the next thing you know, things aren’t okay.  It does fit with the loss of Olga, and how things are fine and normal until they’re not.  But everything following the hospital incident seemed sudden and random, and there wasn’t any indication that things were that bad for Julia.  I know things aren’t always obvious, and Julia was having a hard time after Olga’s death.

Julia’s hospitalization really changed things for her.  She really did understand her parents better, and how hard they worked to give her and Olga a good life.  One where Julia realizes that she can be herself, and also to take control of her own life.

I wasn’t a big fan of the secrets that Olga had- it does seem very much the opposite of the person Julia and her family thought Olga was, and maybe that was the point.  That people aren’t always who we thought they were.  It certainly is true of her parents.  I think I was expecting something different from Olga, that’s all.

Julia, for some people, might be an unlikeable character.  She’s confrontational and brash, and fights with her mom a lot.  She’s very angry, especially in the beginning, but she really does mature and grow and learn how to deal with everything that happened with Olga.

I also really like that there was dialogue in Spanish, and that it wasn’t italicized or (if I’m remembering correctly) translated.  It wasn’t treated any different because it wasn’t English.

4 stars.  I really liked seeing how much Julia changed and matured throughout the book.  There was one moment that was really confusing, and I wasn’t completely thrilled about Olga’s secret, but overall, I think I think this book is a really great one to read.