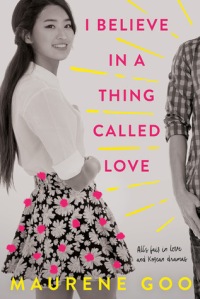 Book: I Believe In A Thing Called Love by Maurene Goo

Desi Lee believes anything is possible if you have a plan. That’s how she became student body president. Varsity soccer star. And it’s how she’ll get into Stanford. But—she’s never had a boyfriend. In fact, she’s a disaster in romance, a clumsy, stammering humiliation magnet whose botched attempts at flirting have become legendary with her friends. So when the hottest human specimen to have ever lived walks into her life one day, Desi decides to tackle her flirting failures with the same zest she’s applied to everything else in her life. She finds guidance in the Korean dramas her father has been obsessively watching for years—where the hapless heroine always seems to end up in the arms of her true love by episode ten. It’s a simple formula, and Desi is a quick study. Armed with her “K Drama Steps to True Love,” Desi goes after the moody, elusive artist Luca Drakos—and boat rescues, love triangles, and staged car crashes ensue. But when the fun and games turn to true feels, Desi finds out that real love is about way more than just drama.

This book was so cute!  I really loved Desi and how she needed steps to finding true love.  It kind of sounds like something I might have come up with in high school.  I loved Desi, and she’s full of awesome and amazingness, and I dare you to not like her, because it’s pretty damn hard not to.

I really liked the relationship she had with her father, and it was nice to such such a great parent-child relationship. I know parents who aren’t around a lot are a big part of YA, so it was nice to see Desi’s dad and how involved he was in her life.

I haven’t watched any K-dramas, so I am completely clueless about it would parallel them…especially since they are her guide to find love.  It kind of makes me want to watch them, just to get a sense of the stories, and how they influenced her guide to getting a guy.  The author does have a bunch of recommendations at the end of the book, so maybe those will be a good place to start…assuming I actually sit down to watch one of them.

Back to the book, though.  As much as I loved Desi, I kind of hated how she thought she was different than Luca’s ex. In her own way, it was a little bit manipulative, plus the whole blowing off her college interview for him kind of bugged me too.  But also in line with your typical rom-com…so…I guess I have mixed feelings about it.  She makes some questionable decisions, but there is something very endearing about her, hence the mixed feelings.

4 stars.  It is a cute book, and even though I wasn’t a big fan of some of Desi’s decisions, I still really liked the story and I especially liked her relationship with her dad.