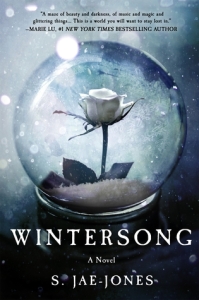 The last night of the year. Now the days of winter begin and the Goblin King rides abroad, searching for his bride…

All her life, Liesl has heard tales of the beautiful, dangerous Goblin King. They’ve enraptured her mind, her spirit, and inspired her musical compositions. Now eighteen and helping to run her family’s inn, Liesl can’t help but feel that her musical dreams and childhood fantasies are slipping away.

But when her own sister is taken by the Goblin King, Liesl has no choice but to journey to the Underground to save her. Drawn to the strange, captivating world she finds—and the mysterious man who rules it—she soon faces an impossible decision. And with time and the old laws working against her, Liesl must discover who she truly is before her fate is sealed.

I loved this book!  Wintersong was one of the books I was looking forward to reading, but I’m just now getting around to it.

I was reminded of a few books when I was reading Wintersong.  If you like the Iron Fey series, this is the book for you!  It has a similar feel to the Iron Fey series, so they’re pretty good read-alikes for each other.  I’d describe it as Hades & Persphone meets The Iron Fey meets Caraval (which I read after Wintersong but I’m still going with it because this review is obviously being written after reading both books).

I felt very much like I was in a fairy-tale, particularly a German fairy-tale.  I loved the idea of the Goblin King, and how people ended up in the Underground.  It’s such a vivid book and I really felt like I was in their world.  I really didn’t want the book to come to an end, because it meant leaving Liesl’s world, and I didn’t want to do that.  At least there’s a sequel, so there will be more to this story.  Which is good, considering the way Wintersong ended.  It’s going to be a long wait until the sequel comes out.

Liesl is such a great character- she is more courageous than she knows, and she would do anything for her sister- even agreeing to marry the Goblin King to keep her sister safe.  I think being Underground and around the Goblin King ended up being a good thing for her- she learns a lot about herself, and I feel like she becomes more confident in herself as she worked on her music.  She’s a character I can really relate to- taking care of everyone, and feeling like she isn’t good enough, even though she is, and she just needs to believe in herself.

There’s something very dreamlike about this book, and it’s very magical.  There’s something dark and…nostalgic isn’t necessarily the word I’m looking for, but…maybe lament and looking for something lost and/or forgotten?  This book is downright beautiful and poetic, and if you haven’t read it, trust me when I say that you really need to read it!

5 stars.  I’m so glad it lived up to my expectations and the hype!  This book is dark and beautiful and amazing!