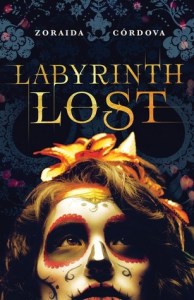 Nothing says Happy Birthday like summoning the spirits of your dead relatives.

Alex is a bruja, the most powerful witch in a generation…and she hates magic. At her Deathday celebration, Alex performs a spell to rid herself of her power. But it backfires. Her whole family vanishes into thin air, leaving her alone with Nova, a brujo boy she can’t trust. A boy whose intentions are as dark as the strange marks on his skin.

The only way to get her family back is to travel with Nova to Los Lagos, a land in-between, as dark as Limbo and as strange as Wonderland…

I really loved the magic, traditions and culture in Labyrinth Lost.  When I first heard about it, I knew I wanted to rea it, because it seemed really different.

Los Lagos was a really vivid setting- it had this Wonderland feel to it, and I think, if it were to be adapted into a movie or t.v. show, that Los Lagos would be really pretty to look at.  I thought things were pretty interesting leading up to Los Lagos, and as pretty and vivid at it seems, it was also the point where I started to lose a little bit of interest.

I think it’s mostly because the stakes never felt really high.  I know Alex is trying to get her family back, but there was never the sense of urgency that she would never get them back if she didn’t comply with the Devourer’s wishes.  It was pretty predictable that she’d be reunited with them, and I kind of felt like the book never really made me feel like it was a distinct possibility.

There were also a lot of the tropes you’d see in a book like this.  The girl who’s the most powerful in a while, but doesn’t want it and would do anything to get rid of it.  There’s the best friend who has no idea her best friend is a bruja but goes after her anyway, and the bad boy with a troubled past who, in the end, does the right thing by trying to help our heroine.  It wasn’t annoying enough to make me dislike it, but just annoying enough for me to bring it up. So keep that in min if you’re thinking about reading it.

The magic and folklore were really different, and I liked the idea of a Deathday celebration.  There was something very old and traditional about the magic, like it was passed down from generation to generation.  I also really liked the contrast between Brooklyn and Los Lagos and Brooklyn and the magic we see in the book.

I did think Alex was a little bit on the bratty side- her family really cared about her, as did a lot of other people, and it seemed like she threw it right in their faces at her Deathday celebration.  I am curious about why her mom didn’t really put her through their magical training a little more.  I wonder if maybe that’s part of Alex’s problem.  Maybe not, but I do wonder if it would have made a difference.

And the cover!  It’s really unique and I’d definitely pick it up based off of the cover alone.

4 stars.  I can’t wait to read the next book, because I am curious to see where things go.  Especially with how the book ended.  It is really unique, and worth checking out!