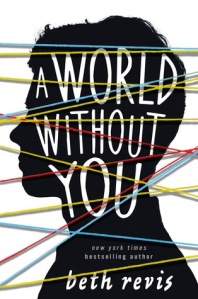 Book: A World Without You by Beth Revis

What would you do to bring back someone you love? After the unexpected loss of his girlfriend, a boy suffering from delusions believes he can travel through time to save her in this gripping new novel from New York Times bestselling author Beth Revis.

Seventeen-year-old Bo has always had delusions that he can travel through time. When he was ten, Bo claimed to have witnessed the Titanic hit an iceberg, and at fifteen, he found himself on a Civil War battlefield, horrified by the bodies surrounding him. So when his concerned parents send him to a school for troubled youth, Bo assumes he knows the truth: that he’s actually attending Berkshire Academy, a school for kids who, like Bo, have “superpowers.”

At Berkshire, Bo falls in love with Sofia, a quiet girl with a tragic past and the superpower of invisibility. Sofia helps Bo open up in a way he never has before. In turn, Bo provides comfort to Sofia, who lost her mother and two sisters at a very young age.

But even the strength of their love isn’t enough to help Sofia escape her deep depression. After she commits suicide, Bo is convinced that she’s not actually dead. He believes that she’s stuck somewhere in time — that he somehow left her in the past, and now it’s his job to save her.

In her first contemporary novel, Beth Revis guides readers through the mind of a young man struggling to process his grief as he fights his way through his delusions. As Bo becomes more and more determined to save Sofia, he has to decide whether to face his demons head-on, or succumb to a psychosis that will let him be with the girl he loves.

I have so many thoughts about A World Without You!

So, I have to admit that I knew I wanted to read this book, but that I didn’t know what it was about going in. At first, I didn’t realize it was a contemporary, because of the whole school-for-kids-with-special-powers aspect.  As the book went on, I realized that, in fact, the book was not sci-fi or paranormal or fantasy- basically, whatever genre you classify kids-with-special powers as.  That was when I realized the book was more contemporary than anything else.

I was a little disappointed that it was a contemporary novel, because I think it had a lot of promise if it had stuck to the idea that Sofia was trapped in 1692 Salem, Massachusetts, and not the aftermath of her suicide. I do think the books works better if you don’t know that going in, because the paralyzing fear that something is wrong is much more palpable.  I kind of liked that I didn’t realize something was wrong at first, because everything seemed so normal.  But it was frustrating at the same time, because it became a story I wasn’t as interested in.

I think, had I known going in that Bo had severe mental illness, I would have spent the book frustrated knowing what was going on, and waiting for him to catch up and figure everything out.  There is an undercurrent of fear and confusion and you really see Bo lose all sense of time and reality.  It’s also the most severe case I’ve seen in any YA book that deals with mental illness- I think Identical by Ellen Hopkins is the only other one I can think of that comes remotely close, and it’s pretty similar in that you don’t realize what’s going on until the end of the novel.

I did really want the story where Bo has to go back in time to save Sofia- partly because that part of the novel really interested me, but I’m also curious about how Revis would tell that story.

I feel like the blurb gave away way too much.  I know I mentioned that this a book that may be better if you don’t know what’s going on, and you’re figuring things out right alongside Bo.  But I still think it works better if you know nothing.

We also get a few chapters narrated by Phoebe, who is Bo’s sister.  I feel like her chapters were meant to show how different they are, and how everything that is going on with Bo affects her.  Her chapters were boring and flat, and I feel like all she did was complain about how no one paid attention to her because she’s the good student who’s going off to college.  It’s clear that her parents seem to be focused on Bo- which is understandable- but I do understand that her parents probably don’t give her a lot of attention because she’s the one they DON’T have to worry about. And given everything going on with Bo, she probably feels like she has to do well.

It is hard to say for sure, though, since most of the book focused on Bo, and we only get a few chapters focusing on Phoebe.

The last chapter- an epilogue- was really weird for me.  It did leave you wondering if maybe Bo did have some sort of power or ability but no one realized it because it presented as something else.  It’s ambiguous enough that you’re not sure, but…I am not a fan of the epilogue.  I know it’s trying to wrap up with what happened the previous chapter, and that if the book had ended with that chapter…it would have been a hell of a cliffhanger.  But I felt like the epilogue took away a lot of the fear and confusion that we saw in the chapter before it, and it really lost the darkness and edge that it would have had otherwise.

The moment between Bo and Phoebe was weird- if Bo does have a mental illness, then was it just a coincidence? It did feel off, like maybe he did have some sort of supernatural ability, but no one believed him.  I wonder if maybe he did, but it wasn’t said outright, because it would have contradicted everything in the book?  Maybe I’m wrong, but I felt like you could see it that way.

3 stars.  I do think it works better if you don’t read the blurb, but it’s also a really good look at mental illness.  It’s just not for me.