Book Review Round-Up is when I talk about several books in one post.  Today’s books are When Reason Breaks By Cindy Rodriguez, Compulsion by Martina Boone and Split Second by Kasie West. 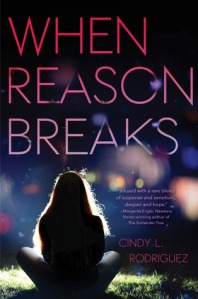 What It’s About: 13 Reasons Why meets the poetry of Emily Dickinson in this gripping debut novel perfect for fans of Sara Zarr or Jennifer Brown.

A Goth girl with an attitude problem, Elizabeth Davis must learn to control her anger before it destroys her. Emily Delgado appears to be a smart, sweet girl, with a normal life, but as depression clutches at her, she struggles to feel normal. Both girls are in Ms. Diaz’s English class, where they connect to the words of Emily Dickinson. Both are hovering on the edge of an emotional precipice. One of them will attempt suicide. And with Dickinson’s poetry as their guide, both girls must conquer their personal demons to ever be happy.

In an emotionally taut novel with a richly diverse cast of characters, readers will relish in the poetry of Emily Dickinson and be completely swept up in the turmoil of two girls grappling with demons beyond their control.

What I Thought: I’ve wanted to read When Reason Breaks ever since I heard about it. I thought the dual narration worked really well, even in the audio book. It was hard at first, telling the two girls apart, but as the book went on, it got easier because Elizabeth and Emily are very different girls. I’m also glad that Elizabeth went by Elizabeth, because two Emily’s in the audio book would have been a little bit hard to keep up with. Especially with the connection to Emily Dickinson we see throughout the book.

I will say that I was frustrated with how Mrs. Diaz dealt with the anonymous letters she got from one of her students. I get why she would assume the letters were from Elizabeth- Elizabeth is not only Goth, but has a lot of other issues that she’s dealing with at home. I’m not at all saying that if you’re Goth, you’re depressed and suicidal, and this book clearly shows that you can be depressed and suicidal and still appear like everything is fine, even if it’s not. But it frustrated me, because she’s focusing all of her attention on the student she thinks needs helps- it’s like she doesn’t consider that it could be someone else, and that was frustrating to listen to, because depression isn’t always obvious. At least she realizes that a student needs help, and that she was able to save the student in time. We don’t really see any attempts at recovery, but this book isn’t about that. It’s about the struggle of dealing with something and not knowing what to do or how to handle it.

Cassandra Morris was an excellent narrator, and even though I’m actively seeking out other books she’s narrated, if I saw she narrated a book that I was considering listening to, I’d definitely consider it as an audio book. I do wish she had done something slightly different for the two girls, but overall, she did a pretty good job. I could have sworn I’ve listened to a book by her, because she sounded really familiar, but I haven’t. Maybe she sounds similar to another narrator Ive listened to.

My Rating: 4 stars. Mostly because the assumptions that Mrs. Diaz made in regard to who was sending her letters was really frustrating (as understandable as it was), and it was a little hard to get over. It is a very good look at depression and the different forms it can take.

Series: The Heirs Of Watson Island #1

What It’s About: Beautiful Creatures meets The Raven Boys in Compulsion, the first novel in a spellbinding new trilogy.

All her life, Barrie Watson has been a virtual prisoner in the house where she lived with her shut-in mother. When her mother dies, Barrie promises to put some mileage on her stiletto heels. But she finds a new kind of prison at her aunt’s South Carolina plantation instead—a prison guarded by an ancient spirit who long ago cursed one of the three founding families of Watson Island and gave the others magical gifts that became compulsions.

Stuck with the ghosts of a generations-old feud and hunted by forces she cannot see, Barrie must find a way to break free of the family legacy. With the help of sun-kissed Eight Beaufort, who knows what Barrie wants before she knows herself, the last Watson heir starts to unravel her family’s twisted secrets. What she finds is dangerous: a love she never expected, a river that turns to fire at midnight, a gorgeous cousin who isn’t what she seems, and very real enemies who want both Eight and Barrie dead.

What I Thought: I don’t remember how I came across this book, but it seemed intriguing enough, especially since it’s described as Beautiful Creatures meets The Raven Boys. I know I read The Raven Boys (and I know a lot of people love that series) but I don’t remember much about it, other than they’re trying to find…something. I do love Beautiful Creatures, and I was hoping that I would like this book as much as that series.

As much as I wanted to like it, I ended up not liking it that much. As much as I like the premise, it fell short for me. I can see the comparisons to Beautiful Creatures, and there is this southern Gothic feel to the book, but it didn’t work as well as I thought it would. I did listen to Beautiful Creatures on audio, while I read Compulsion, and I wonder if that would have made a difference. I have the feeling it wouldn’t. I really wish we had more information about the curse that affected all three families and why it bound them to the island. I feel like we got something, but it’s honestly not something I can remember. There are gifts and curses and there is not enough detail for me. All of the world-building was there (and to be honest, it felt a little forced), but never really explained. I wish it were, because those details could have been interesting.

My Rating: 2 stars. Even though I wasn’t the biggest fan of this book, I have a hard time giving it one star, and I’m not sure why.

What It’s About: Life can change in a split second.

Addie hardly recognizes her life since her parents divorced. Her boyfriend used her. Her best friend betrayed her. She can’t believe this is the future she chose. On top of that, her ability is acting up. She’s always been able to Search the future when presented with a choice. Now she can manipulate and slow down time, too . . . but not without a price.

When Addie’s dad invites her to spend her winter break with him, she jumps at the chance to escape into the Norm world of Dallas, Texas. There she meets the handsome and achingly familiar Trevor. He’s a virtual stranger to her, so why does her heart do a funny flip every time she sees him? But after witnessing secrets that were supposed to stay hidden, Trevor quickly seems more suspicious of Addie than interested in her. And she has an inexplicable desire to change that.

Meanwhile, her best friend, Laila, has a secret of her own: she can restore Addie’s memories . . . once she learns how. But there are powerful people who don’t want to see this happen. Desperate, Laila tries to manipulate Connor, a brooding bad boy from school—but he seems to be the only boy in the Compound immune to her charms. And the only one who can help her.

As Addie and Laila frantically attempt to retrieve the lost memories, Addie must piece together a world she thought she knew before she loses the love she nearly forgot . . . and a future that could change everything.

What I Thought: I didn’t like Split Second as much as I thought I would. I liked the first one, but I thought Split Second was really confusing. It was narrated by Addie and Laila, and even though there were major differences in their chapters, in terms of how their stories unfolded, it was hard to tell them apart. Just when I got used to one of them, the chapter was over, and I was thrown into someone else’s story.

I did have trouble focusing on the book, so maybe my massive confusion was partly because I wasn’t paying as much attention as I could have. I do remember having this problem with Pivot Point, and being confused by the two different time lines, but I don’t remember having this much trouble keeping up with what was going on. It’s also been a while since I’ve read Pivot Point, so part of might be because I remember nothing. I have really liked the contemporary books I’ve read by West, so maybe her more paranormal stuff isn’t my thing.

My Rating: 2 stars. I found that I was really confused, and unable to keep up. It’s an interesting idea, but not my cup of tea.