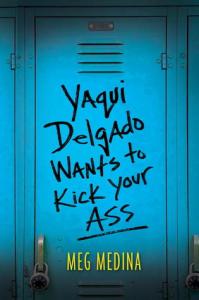 In Meg Medina’s compelling new novel, a Latina teen is targeted by a bully at her new school — and must discover resources she never knew she had.

One morning before school, some girl tells Piddy Sanchez that Yaqui Delgado hates her and wants to kick her ass. Piddy doesn’t even know who Yaqui is, never mind what she’s done to piss her off. Word is that Yaqui thinks Piddy is stuck-up, shakes her stuff when she walks, and isn’t Latin enough with her white skin, good grades, and no accent. And Yaqui isn’t kidding around, so Piddy better watch her back. At first Piddy is more concerned with trying to find out more about the father she’s never met and how to balance honors courses with her weekend job at the neighborhood hair salon. But as the harassment escalates, avoiding Yaqui and her gang starts to take over Piddy’s life. Is there any way for Piddy to survive without closing herself off or running away? In an all-too-realistic novel, Meg Medina portrays a sympathetic heroine who is forced to decide who she really is.

I’m not sure how I feel about Yaqui Delgado.  I really liked Piddy, and she’s such a great character. She has to deal with bullying- from a girl she doesn’t even know, and it’s hard for her to deal with it, to the point that she starts skipping school, and eventually has to change schools, because she has no other option.  Well, she does, but for Piddy, it’s her best option.  I did like that her mom and her mom’s best friend (Lila) were around a lot in the book, which is pretty rare in YA.  Still, we don’t see Piddy really hang out with anyone her own age- she spends a lot of time with Lila, and there is a guy for part of the book, but it seemed a little strange to me.

I couldn’t quite connect with her fear of Yaqui, even after one really big moment with her.  I think part of it is that Piddy and Yaqui didn’t even know each other, and it’s hard for me to understand how Yaqui could decide that Piddy was her target, no matter how hard I tried to understand it.  I did get her anger with her mother, but I also understand why her mother kept things about her dad from her.  Unfortunately, it’s something I could relate to. I think I felt like I was told how Piddy felt, but I never completely FELT it, particularly where Yaqui was concerned.

The book definitely needed more where Yaqui was concerned, and I wish we had more of her story, because her wanting to kick Piddy’s ass was random and out of nowhere.  Even though the book is very much about the effect it has on Piddy, I think it focused a little too much on bullying, to the point that other things weren’t as developed as they could have been.

3 stars.  I did like the community that Piddy has, and I felt for her, because she had some things going on, but it wasn’t completely there for me.