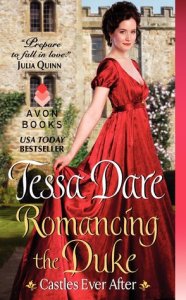 Series: Castles Ever After #1

In the first in Tessa Dare’s captivating Castles Ever After series, a mysterious fortress is the setting for an unlikely love…

As the daughter of a famed author, Isolde Ophelia Goodnight grew up on tales of brave knights and fair maidens. She never doubted romance would be in her future, too. The storybooks offered endless possibilities.

And as she grew older, Izzy crossed them off. One by one by one.

Now Izzy’s given up yearning for romance. She’ll settle for a roof over her head. What fairy tales are left over for an impoverished twenty-six year-old woman who’s never even been kissed?

I was randomly in the mood for romance, so I picked this one up from the library.  I liked it, but not as much as I thought I would, especially since the couple of romance blogs I read really seem to like Tessa Dare.

It did make me smile, though, and I was left wanting to believe that true love and fairy tales exist in real life. Which they do, for some people, and I liked the hopeful feeling that fairy tales are real.

I loved the historical fanboys/fangirls in the book.  That was fun and unexpected, but it’s a good fun and unexpected, and it made me laugh.  But I also liked that Izzy had to act a certain way because of it, and I liked that Ransom hated that she thought she had to live up to their expectations.  I felt for her, because life has not been easy for her, and yet, people want her to remain the sweet, innocent girl that they think she is.  She has fears but she deals with them, and she might not seem like she’s strong, but she is.

And I believed in her and Ransom, even though they are complete opposites, because Izzy is hopeful and romantic, where Ransom is more cynical and distrusting.  They really complement each other, and I loved watching them fall in love.  It’s sweet and adorable, and it builds over the course of the book.

And things haven’t been easy for Ransom either, with being engaged but the engagement being broken off, and with his vision not completely working…he’s nicer than he initially seems.  Izzy really brings out the best in him, even when he tries to fight it and pretend like he doesn’t have feelings for her.