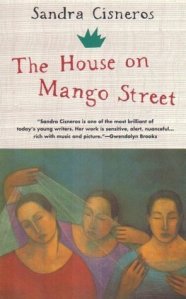 Book: The House Of Mango Street by Sandra Cisneros

Told in a series of vignettes stunning for their eloquence, The House on Mango Street is Sandra Cisneros’s greatly admired novel of a young girl growing up in the Latino section of Chicago. Acclaimed by critics, beloved by children, their parents and grandparents, taught everywhere from inner-city grade schools to universities across the country, and translated all over the world, it has entered the canon of coming-of-age classics.

Sometimes heartbreaking, sometimes deeply joyous, The House on Mango Street tells the story of Esperanza Cordero, whose neighborhood is one of harsh realities and harsh beauty. Esperanza doesn’t want to belong–not to her rundown neighborhood, and not to the low expectations the world has for her. Esperanza’s story is that of a young girl coming into her power, and inventing for herself what she will become.

Like Things Fall Apart, The House On Mango Street was a book I had to read in high school, and even though I sort of remembered the story, there was a lot I had forgotten since then.  I don’t remember how I felt about it when I read it in high school- I’m pretty sure it wasn’t one of the few books I had to read and ended up liking, but as an adult, I really liked it.

I really liked how we get these snapshots of Esperanza’s life over the course of a year.  You get such a good glimpse of what her neighborhood is like, and the expectations that the world has for her.  You see how she wants to break out of that, and how she wants more for herself, even though the people around her might not expect it, or even encourage it.  There were a couple points- some unwelcome kisses and when one of her neighbors gets married- where there could be more to it, but you could also just take it as it was written.

It definitely broke my heart at times, but there were also times where I really felt for Esperanza, and I finished the book feeling confident that things would work out in her favor.  It reminded me of my own childhood, and how different things are now for kids.  There is something timeless about this book, and even though it was published just over 30 years ago, it holds up really well.  It’s still relevant, and totally worth reading, if you haven’t read it.  It’s even worth re-reading as an adult, and I’m actually glad I happened to see it at the library.

4 stars.  I didn’t quite love it, just because I wanted to live in Esperanza’s world for a little bit longer, but overall, I’m really glad I picked it up and read it.