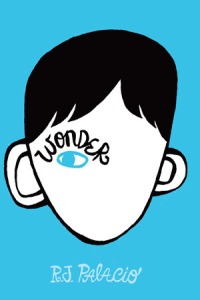 I won’t describe what I look like. Whatever you’re thinking, it’s probably worse.

August (Auggie) Pullman was born with a facial deformity that prevented him from going to a mainstream school—until now. He’s about to start 5th grade at Beecher Prep, and if you’ve ever been the new kid then you know how hard that can be. The thing is Auggie’s just an ordinary kid, with an extraordinary face. But can he convince his new classmates that he’s just like them, despite appearances?

R. J. Palacio has written a spare, warm, uplifting story that will have readers laughing one minute and wiping away tears the next. With wonderfully realistic family interactions (flawed, but loving), lively school scenes, and short chapters, Wonder is accessible to readers of all levels.

Wonder is one of those books I’ve heard a lot about, and knew that people really loved, but never got around to reading until now.  I liked Wonder, but not as much as I thought I would.

I really liked the family dynamic, and I really felt for his sister Via.  We don’t get a lot of her, but we see how the attention Auggie gets affects her, and I really liked seeing that.  I’m not sure if I could have handled an entire book from her perspective, but I did like the small bit that we do get in the book.

I also liked how real the characters felt.  How they acted- what with The Plague thing, and the stares and stuff, I can see that happening in real life.  How one of the moms acted was horrible- she photoshopped Auggie out of the class photo, and acted like he didn’t belong in school, just because of how he looks.  And it was really hard to read, because, theoretically, she should know better.  But clearly not, and it makes me wonder if her son acted the way he did because he learned it from her.  In the end, the other kids ended up being pretty okay, except for the one.

There is something I have mixed feelings about, though, and that’s Auggie himself.  I liked that he sees himself as a normal kid, and that he’s not special or extraordinary, just because of how he looks, even though people around him probably think he’s special because of how much he accomplished, and all of the surgeries he’s had to endure.  On the one hand, I liked that the book mentioned the fact that he was born with a cleft palate, which led to a lot of other health issues for Auggie, but didn’t focus too much on it.  But at the same time, I wanted a little more about it, because the book hardly goes into it.

Another issue I had was the fact that the characters seemed a lot older than 10.  The way they talked and acted…it didn’t mesh well with the fact that it’s middle grade.  It was really disorienting, and if 10 year-olds are, in real life, dating the way some of them seem to be dating in this book, I’m a little worried.

The book was also super-positive, which I get, considering the target audience, but it made the book feel too perfect, like nothing gets to Auggie (even though it must), and that everything will work out just fine, no matter what.  It felt too simple, for something that could have had even a little more complexity to it.  It’s not for me to say that Auggie is too well-adjusted, because I’ve never experienced what Auggie has, and I have no idea what it’s like to be in his position.  But it was also something that was a little off-putting, just because I wanted something that seemed a little more realistic.

3 stars.  I get why people loved this book so much, and I do like the message of not judging people because of how they look, and that you should be kind to people.  But it was too simple, and too perfect, and I wanted something a little more complex and something that was a little less perfect.