Book Talk is a sporadic feature where I talk about non-book review but bookish things…and today’s post is all about The BFG!

And as a warning, there are some spoilers for both the movie and the book!

I saw The BFG a few days ago, because it looked awesome in the trailers, and I remember reading Roald Dahl as a kid, so I knew I had to go see this movie adaptation.  Sadly, I couldn’t remember if this was one of the books I read by Dahl as a kid, because the movie didn’t jog any memories of reading the book.  So either I never read it or I read it but don’t remember reading it.  Either way, it was new to me.

I loved it as a movie, and even though I’m not a big fan of 3D, it was totally worth it in 3D.  I’m serious, guys, it worked really well in 3D.  Things weren’t jumping out at you, but there was a lot more scale and perspective and I felt a lot more like I was actually in the movie, and I don’t know that you would have had that experience in the non-3D version.  Maybe you would have but not to the same degree.  But I really felt like we were immersed in Giant Country.  And I’m not going to lie, I cried at the end.  I loved the movie, especially the scene where Sophie and the BFG go to catch dreams.  It looked really pretty, and I wish we saw the actual dreams just going around. But I also liked that they were balls of light.  And I really liked how his house looked!  It was just really pretty to watch.

With the BFG himself, you see how small everything is in comparison to him, and that’s partly why I liked it. You felt small, but in a good way.  And in comparison to the other giants, you see that he’s really not that big himself. Overall, it was just really pretty to see, and I definitely recommend seeing it theaters if you can.  As it is, I don’t know that it will be in theaters for very long, because it seems like there aren’t a lot of showings of it…

I also really liked it as an adaptation!  With any adaptation, there were some changes, but overall, it followed the book pretty closely.  I really wish we saw the dreams, especially since there are dreams described in the book.  I know I already kind of mentioned that, with when they go to catch the dreams, but seeing the dreams would have been really cool. 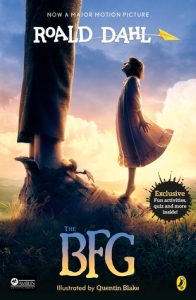 The Book: The BFG by Roald Dahl, illustrated by Quentin Blake

What It’s About: Captured by a giant! The BFG is no ordinary bone-crunching giant. He is far too nice and jumbly. It’s lucky for Sophie that he is. Had she been carried off in the middle of the night by the Bloodbottler, the Fleshlumpeater, the Bonecruncher, or any of the other giants-rather than the BFG-she would have soon become breakfast.

When Sophie hears that they are flush-bunking off in England to swollomp a few nice little chiddlers, she decides she must stop them once and for all. And the BFG is going to help her!

What I Thought: I really liked it!  It’s such a cute story, and even though it’s one of the Roald Dahl books I never read as kid, I’m glad I finally got to read it.  I remember liking some of his other books, and it’s such an imaginative one.  I will say that some of the gifts described at the end of the book were stereotypical, and that bothered me. And for some reason, the book didn’t seem as magical as the movie did, which makes me hesitant to re-read some of Dahl’s other books, because I feel like the magic and creativity of his books might not have the same effect on me as an adult as they did when I was a kid.  It makes me wonder if maybe I’m too old for Roald Dahl, which makes me a little sad, because generally, I don’t think you’re too old to read anything.  But in this case?  Maybe it’s possible.  I’d still recommend it as a book, because I really like the overall creativity and the conversation that the BFG has with Sophie about how giants don’t kill each other, and how kind the BFG is to Sophie.

My Rating: 4 stars.  I really like the story, but it wasn’t as magical as I thought it would be.

One thought on “Book Talk: The BFG, A Movie And Book Review”