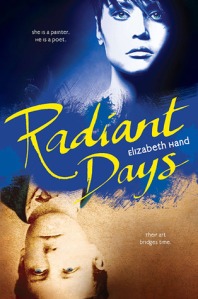 It is 1978. Merle is in her first year at the Corcoran School of Art, catapulted from her impoverished Appalachian upbringing into a sophisticated, dissipated art scene.

It is also 1870. The teenage poet Arthur Rimbaud is on the verge of breaking through to the images and voice that will make his name.

The meshed power of words and art thins the boundaries between the present and the past—and allows these two troubled, brilliant artists to enter each other’s worlds.

When I first saw the summary after randomly browsing the YA section at the library, I was oddly reminded of that one movie (I think it’s Keanu Reeves and someone else) where they’re both staying at that one house but in different years and they’re somehow able to write letters to each other.  Which, mind you, I actually haven’t seen, but that’s what I was reminded of, just based on the trailer…and honestly, this book was so, so confusing.

Arthur’s timeline seemed a lot more confusing than Merle’s- although I will say that there were points where Merle’s timeline was sort of confusing, mostly where Arthur was concerned.  It didn’t help that Hand randomly switched perspectives and time periods, and it was hard to be fully into a book where things just randomly jump around.  The Orpheus myth at the end of the book didn’t make sense, since it was randomly thrown in, and I didn’t get why it was even mentioned, since it wasn’t important, or even mentioned, up to that point.

Even though Merle ends up being inspired by Arthur’s poetry, and he somehow manages to see her work in a gallery, there doesn’t seem to be a big connection between them.  I really thought there would be more between them, and when they do travel in time, they don’t particularly care about talking to each other.

It’s also a little bit new-age-y, which probably wouldn’t have bothered me in most cases, but it seemed a little weird and over-done in this book.  And honestly, the artist aspect didn’t have much impact for me, and it seemed to take a backseat to the aimlessness this book seemed to have.

I’m also not sure why this was shelved in the YA section, because even though Arthur and Merle are teens in this book, something about this book seemed like it was meant for an older audience, not YA audience.  In general, the overall feel I get from this book is old, and it really does feel like it was written long before 2012…that seems too recent of a publication date, at least for me.

I didn’t really care for Merle, who gets this scholarship (I think), only to drop out of school.  It seems like such a waste, especially for someone who wanted to get away from her family and the rural area she grew up in.  We do get to know more about her than Arthur- possibly because he was a published poet in real life.  Merle’s timeline seemed much more fleshed out than Arthur’s, and I kind of wanted a little bit more of Arthur.

2 stars.  I think I liked the idea of the story more than the story itself.  Overall, Radiant Days was just okay.