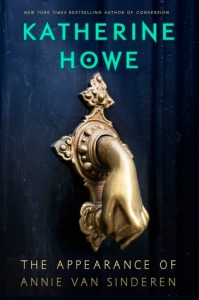 Book: The Appearance of Annie Van Sinderen by Katherine Howe

It’s summertime in New York City, and aspiring filmmaker Wes Auckerman has just arrived to start his summer term at NYU. While shooting a séance at a psychic’s in the East Village, he meets a mysterious, intoxicatingly beautiful girl named Annie.

As they start spending time together, Wes finds himself falling for her, drawn to her rose-petal lips and her entrancing glow. There’s just something about her that he can’t put his finger on, something faraway and otherworldly that compels him to fall even deeper. Annie’s from the city, and yet she seems just as out of place as Wes feels. Lost in the chaos of the busy city streets, she’s been searching for something—a missing ring. And now Annie is running out of time and needs Wes’s help. As they search together, Annie and Wes uncover secrets lurking around every corner, secrets that will reveal the truth of Annie’s dark past.

After reading Conversion a couple of years ago, I was really interested to see what else Howe would come up with. When I saw a copy of Annie Van Sinderen at the library, I knew I had to read it.

What I find most interesting about Annie is that it’s a ghost story that never mentions the word ghost.  It’s interesting that she can be seen by only a few people, and it makes you wonder why they can see her, and no one else can.  I did like that Wes and his friends were able to help her and figure out what was going on.  And why she’s still around.

I thought Annie was the most interesting character, and how she went in between present and past to be really interesting, especially once we got past the set-up/introducing of everyone.  Her story and everything that happened up to her death was very realistic, and even though I probably won’t read anything history-related soon, I still really want to read something historical.  Going in and out of past and present worked better than I thought it would, and it was a really nice surprise.  I’m also glad we got to see both past and present, because it made Annie’s story and how it connected to the present have a lot more depth.  I’m really glad we see how she ended up staying behind as a ghost.

It is interesting that it took so long for someone to see Annie.  I mean, there must have been people who could her before, right?  So what it is about 2015 that’s so special?  Because of Maddie?  I think I would have liked more of something about why now and not before.

It did start off pretty slow, but I think it’s because of everything that had to be introduced in order for the story to make sense, and I can’t think of a better way to tell the story.  It does pick up the pace after a while, though, once you get through the first part, it’s a really interesting read.

I didn’t find the other characters particularly interesting, but Maddie had a lot of potential, and I wish we saw more of her.

3 stars.  Even though I liked it, it didn’t grab me the way Conversion did, and I wish things were tied up a little more than it was.