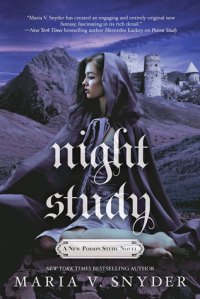 Where I Got It: I got the audio book from audible.com

Ever since being kidnapped from the Illiais Jungle as a child, Yelena Zaltana’s has been fraught with peril. But the recent loss of her Soulfinding abilities has endangered her more than ever before. As she desperately searches for a way to reclaim her magic, her enemies are closing in, and neither Ixia nor Sitia are safe for her anymore. Especially since the growing discord between the two countries and the possibility of a war threatens everything Yelena holds dear.

Valek is determined to protect Yelena, but he’s quickly running out of options. The Commander suspects that his loyalties are divided, and he’s been keeping secrets from Valek…secrets that put him, Yelena and all their friends in terrible danger. As they uncover the various layers of the Commander’s mysterious plans, they realize it’s far more sinister that they could have ever imagined.

I really liked Shadow Study.  Even though I really like this series so far, I’m finding that I don’t like it as much as her Study series (which I want to re-read now, because it’s been a while, but that’s besides the point).

There’s a lot going on, and a lot of things are happening that I never expected.  Like, we get to spend a lot of time with Valek, and we learn so much about him…I’m not sure why I was surprised by one particular revelation, but yet, I didn’t expect it or how it came about.  Part of me wondered if maybe it has to do with the loss of Yelena’s magic, and why she lost it.  I still want to know more about what’s going on with her magic, since it’s definitely different…and it may or may not have to do with some stuff going on.  Yelena without magic is just weird, but you also get to see her adapt to life without it, and how much she really relied on it.  And you don’t realize how much her magic is needed until we need her to use it.

I can’t wait to see how the new characters fit in and how they change things, because I’m sure that will happen.  The changing things, I mean, not the fitting in thing, though I’m sure we’ll see that in the next book.

Speaking of the next book, I need to know what happens!  Will Sitia and Ixia go to war, or can they stop it? There are so many things that I never saw coming, and I’m really curious as to how it will all work out.  If you look up one more chapter in the dictionary, I swear you will see this book next to it, because every chapter ended on a cliffhanger, but it wasn’t annoying because I wanted to keep going.

And everything with Fisk and the Helper’s Guild…I liked getting more with them, and now I want more with them. Maybe, one day, there will be a book focused on Fisk, because he really is an interesting character.

Reviewing this book while not giving anything away is a lot harder then I thought!  Just believe me when I say that there’s a lot at stake, and I’m mostly looking forward to (but also dreading a little) the last book.

And since I listened to the audio book, we can’t forget about Gabra Zackman as the narrator.  She’s done such a great job narrating this series (and the Study series as well), and I can’t picture anyone else narrating these books.  Which reminds me, I really should take a look at what else she’s narrated…

4 stars.  I really liked Night Study!  I don’t know how Snyder is going to tie everything together, but Night Study has me wanting to know what’s going to happen next!