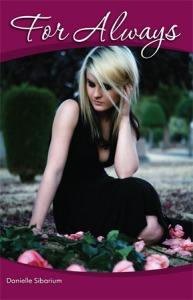 Book: For Always by Danielle Sibarium

You never really get over your first love. Such is the case for fourteen-year-old Stephanie Barrano, self-proclaimed misfit and death magnet. A freshman in high school, Stephanie is befriended by Jordan Brewer, a hot, in-demand senior, who pulls her from the outer circle of obscurity into the realm of acceptance. Jordan quickly works his way into Stephanie’s heart. He’s her everything. And the only person she trusts with the truth about her father’s death. But he won’t act on the strong feelings he has for her. Stephanie vows to wait for him, knowing in time she’ll win his heart.

Two months before her eighteenth birthday, Jordan serves as an impromptu prom date. After sharing a magical evening, Jordan leaves Stephanie with the promise of a future together. Then tragedy strikes. Jordan not only shuts Stephanie out, he also blames her for what happened. Feeling broken and beaten, will she try one last time to get through to Jordan or will she lose him forever?

I didn’t like For Always.  Really, I should have guessed that it wouldn’t be my thing, but it also seemed like it would be really cute and sweet, and instead, the romance drove me completely bonkers.

So, it felt like things were very one-sided- I got the impression that Stephanie was lot more into Jordan, and that he didn’t reciprocate.  I also got the impression he knew that she was into him, and that he strung her along, knowing she was super-into him.  I didn’t understand why she was so into him, and I really wish we saw more of them together, because Stephanie liking him made no sense to me.

Also, this was pretty tame, even by YA standards.  Granted, he refused to do anything with her, which might be why, but it made me feel like this was the YA version of Christian/Inspirational romance.  It was boring, and I felt like there was nothing between them.  It was pretty underwhelming, and it made me wish there were some sort of spark or something between them.  The pace was a little too slow, especially since I felt like there was really nothing between Stephanie and Jordan.  Maybe it was hard to get into because they don’t kiss for the first time until the book is almost over.  And then, out of the blue, he’s telling her mom that he wants to marry her one day.  It really came out of nowhere, and given that he didn’t seem interested in her for most of the book, it seemed out of place that he’d go from showing no interesting to marriage.

Stephanie’s best friend was also really confusing.  Sometimes, she seemed like an awesome friend, but there were other times where she seemed really shallow and self-absorbed.  Her mom barely made an appearance, and when we did see her mom, she seemed to freak out about stuff for no apparent reason.

And the formatting got really frustrating- there was a gap between freshman year Stephanie and senior year Stephanie, and there were quite a few blank pages in the gap.  Plus, the chapters were formatted a little weird, and it broke up the flow for me.

Other than that, I don’t have anything else I want to see.  I’m trying to come up with something else, but I can’t, so…

1 star.  I couldn’t get into it, and the romance didn’t work for me at all.