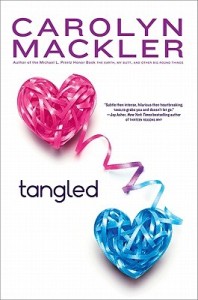 Not the state of being, but a resort in the Caribbean.

Jena, Dakota, Skye, and Owen are all there for different reasons, but at Paradise their lives become tangled together in ways none of them can predict. Paradise will change them all.

It will change Jena, whose first brush with romance takes her that much closer to having a life, and not just reading about those infinitely cooler and more exciting.

It will change Dakota, who needs the devastating truth about his past to make him realize that he doesn’t have to be a jerk just because people think he’s one.

It will change Skye, a heartbreakingly beautiful actress, who must come to terms with the fact that for once she has to stop playing a role or face the consequences.

And it will change Owen, who has never risked anything before and who will take the leap from his online life to a real one all because of a girl he met at Paradise…

From confused to confident and back again, one thing’s certain: Four months after it all begins, none of them will ever be the same.

I thought Tangled was okay!  It had a lot of potential to be really cute, but it wasn’t as cute or fun as I thought it would be.

I think a large part of it is how the story is told.  We get 4 teens, and they each get a section- each teen gets a month or so, before we move on to the next character.  The four stories don’t intersect as much as I though they would, and as far as the ending goes, I really expected all four of them to come together, and for all four stories to come together in some really interesting, big way.  And it didn’t, and I was disappointed with that, because what I thought was going to happen didn’t actually happen.  Not that I had something in mind, because I didn’t, but I was still expecting something to tie all of them together at the end.

I also thought there would be more time at Paradise, but instead we see what life is like for all of them after that trip.  Other than both girls meeting Dakota, and Jena finding a note that Skye left behind that sets up something in Skye’s section, I didn’t really get the point behind going to Paradise.  It almost didn’t matter that they all went, except it sort of does, and not in a way that adds much of anything to the story.

With the four characters getting their own story over the course of four months, you get some insight into each character, but it also broke up the flow of the story, and it made the book seem like four separate stories that randomly connect instead of one cohesive story.  It just made it hard to get into the book and even harder to get invested in any one character, especially since you basically get one character’s story and then you’re pretty much done with them because you’re not really going to see them again.

2 stars.  It was okay, and I don’t really have strong enough feelings about it to care one way or another.