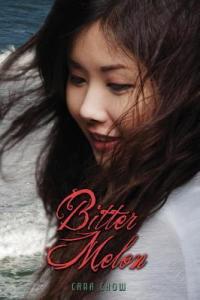 Frances, a Chinese-American student at an academically competitive school in San Francisco, has always had it drilled into her to be obedient to her mother and to be a straight-A student so that she can go to med school.  But is being a doctor what she wants?  It has never even occurred to Frances to question her own feelings and desires until she accidentally winds up in speech class and finds herself with a hidden talent.  Does she dare to challenge the mother who has sacrificed everything for her?  Set in the 1980’s.

I think I liked Bitter Melon, but I’m also not sure how I feel about some of the things that happened in the book.  I felt like Frances and Derek had no chemistry, and her mom…I have such mixed feelings about her mom.

I think parental pressure is something we can all relate to in varying degrees.  Her mom did seem really extreme and slightly abusive.  On the one hand, I can picture parents acting the way her mom does, but at the same time, I really felt felt like the mom was an extreme take on the strict Asian parent stereotype.  I don’t think how how her mom acted is limited to any one group, but at the same time…I didn’t really like that her mom seemed like such an extreme stereotype.  I can’t even begin to imagine what it’s like to have the mother she does, and to have a life planned out for her…a life that she doesn’t want for herself, or to question if that’s the best life for her.

I wanted so much to feel for Frances, but I found that I didn’t particularly care for her or what happened to her.  She seemed really dense sometimes, and I didn’t really get the impression that speech was a hidden talent for her.  And I don’t like how she handled things at the end of the book at all. Granted, I don’t know if there was a better way, or what Frances could have done, but to a certain extent, I felt like she stooped to her mother’s level. Yes, her mother said and did some horrible things, but she still didn’t completely deserve what Frances did.  France getting her revenge, and embarrassing her mom seemed like such a stereotype of someone getting back at the person who treated them horribly.  I also wish that the book ended with more of a resolution between Frances and her mom, because things were a little too unresolved for my liking.

As for Frances and Derek, I really thought that they had no chemistry.  It seemed like he was supposed to be the reason why she finally stood up to her mom- at the very least, a major reason why.  Personally, I have no problem with that, but it could have had the potential to make the book a little bit lighter, but it didn’t- it just added conflict.  As for Frances making changes, and questioning things, I thought that her speech class and the speech tournaments could have done that in a much better way.

Except for the random pop culture references, I forgot that the book was even set in the 1980’s.  Okay, there’s no internet or cell phones, but even then, it seemed like the book could have been set a couple of decades later.  It could have made the book a lot more stifling, but it didn’t really add anything to the book.

2 stars.  It was okay, and I had a hard time relating to Frances and even caring about what happened to her was hard.