Nail Polish Talk is a once-a-month feature where I talk about all things nail polish!

This month, I wore Isabela, Ali, Monaco, and Delores, all from Julep.  I just realized this September was the month of blue (and some violet).  I didn’t even plan that, I just randomly picked colors and they just happened to be on the blue spectrum.

The Week Of September 6: Isabela

I really liked Isabela!  It really reminded me of Linden, in that I was reminded of water the entire week.  There is a similarity in color, but Isabela is a little bit lighter, and it could be interesting to somehow combine them.  It’s such a pretty blue!  I can’t wait to wear it again.

The Week Of September 13: Ali

I got Ali in a mystery box one month, and I was initially unsure about it, because I don’t normally go for soft colors like Ali.  Since it was a mystery box, though, I decided to just go with it.  I was glad I had it, because that week, I really wanted something soft.  It was semi-matte, so a top coat is great if you want a little more shine.  It was a little streaky, but two coats even that out, so it wasn’t a big deal.

I liked it a lot more than I thought I would, and the color even reminded me of the 1950’s for some reason. It’s a great color for a ’50’s dinner or appliances, and the best description I can come up with is a soft minty blue.

It also took a long time to dry, and I ended up with a few smudges.  I also noticed some bubbles the next day.  I’m not sure if it’s the polish, the person applying the polish or if it was the fact that it was really hot and I didn’t give each coat enough time to dry. It could be some combination of those things, and it makes me sort of hesitant to wear it again, but I also want to give it another try before I completely give up on it.

The Week Of September 20: Monaco

Monaco is one of my favorites, and it’s one of the few that I would actually wear frequently!  It’s a pretty blue, and I think gold glitter would make it even prettier.  It’s pretty on it’s own of course, but I am a fan of glitter, and glitter would be a nice contrast for this polish.

It took a lot longer to dry than I remembered, and like Ali, I ended up with a few smudges.  It was in the 90’s on the day I did my nails, and even with 30 minutes between each coat, I still had to re-do one hand.

The Week Of September 27: Delores

Delores is one of the colors I got in the September Maven box, and it seemed like the right color for this week! It’s a lot more matte than I thought it would be, but I even googled linear holographic, and I’m still not sure what that means, so maybe I’m just really confused as to what a linear holographic nail polish is.  There is shimmer in it, but it’s not shimmery.  There’s something about the linear holographic polish seemed familiar, and I couldn’t figure out why.  It was a while before I realized that it reminded me of liquid sand, minus the sand part.  Seriously, it’s liquid sand minus the texture.

September’s box was Alison, Delores and Cassandra.  I got Paula as an add-on, which is great because I’ve wanted it for a while.  And Julep is their new signature creme, and was randomly included in maven boxes this month. 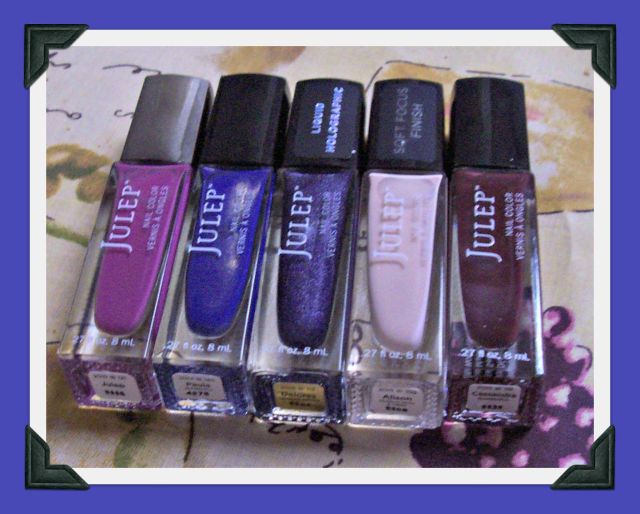 Alison, which is the almond color, and Cassandra, which is the red, are colors I don’t pick for myself, but for some reason, I really wanted colors that I don’t normally go for.  Cassandra would be great for October or November (but especially October).  Alison is the same soft focus as Ali, which I talked about earlier, and now I’m hesitant to wear Alison because what if it has the same issues as Ali?  I’ll still wear it (at least once) and there’s no point in worrying until I actually wear it to see.

I love Delores (as noted above), and it’s such a pretty purple.  Julep is also purple, which is great because purple is my favorite color.  Oddly enough, I don’t wear a lot of purple polish, but I am glad I have a chance to wear it! I’ve also had my eye on Paula, and it looks like such a pretty blue!  I have the feeling it is going to be a favorite, and I just want to stare at the bottle all the time.

As for October’s box, I did skip it, which probably isn’t a surprise at this point in the year, given I’ve probably skipped more boxes than I got, but I really miss getting them, because it’s a good piece of mail, you know?  Ulta did open up a store near my house, so maybe I’ll check it out and see what sort of nail polish they have. Between Julep, Sephora, Ulta and a Sally’s Beauty Supply that opened up near me recently, it’ll be hard to not buy a lot more nail polish.