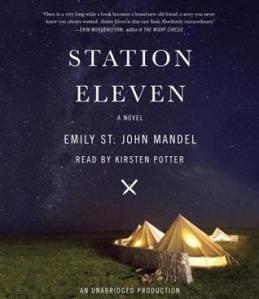 Where I Got It: I borrowed the audio book from the library

An audacious, darkly glittering novel set in the eerie days of civilization’s collapse, Station Eleven tells the spellbinding story of a Hollywood star, his would-be savior, and a nomadic group of actors roaming the scattered outposts of the Great Lakes region, risking everything for art and humanity.

One snowy night Arthur Leander, a famous actor, has a heart attack onstage during a production of King Lear. Jeevan Chaudhary, a paparazzo-turned-EMT, is in the audience and leaps to his aid. A child actress named Kirsten Raymonde watches in horror as Jeevan performs CPR, pumping Arthur’s chest as the curtain drops, but Arthur is dead. That same night, as Jeevan walks home from the theater, a terrible flu begins to spread. Hospitals are flooded and Jeevan and his brother barricade themselves inside an apartment, watching out the window as cars clog the highways, gunshots ring out, and life disintegrates around them.

Fifteen years later, Kirsten is an actress with the Traveling Symphony. Together, this small troupe moves between the settlements of an altered world, performing Shakespeare and music for scattered communities of survivors. Written on their caravan, and tattooed on Kirsten’s arm is a line from Star Trek: “Because survival is insufficient.” But when they arrive in St. Deborah by the Water, they encounter a violent prophet who digs graves for anyone who dares to leave.

Spanning decades, moving back and forth in time, and vividly depicting life before and after the pandemic, this suspenseful, elegiac novel is rife with beauty. As Arthur falls in and out of love, as Jeevan watches the newscasters say their final good-byes, and as Kirsten finds herself caught in the crosshairs of the prophet, we see the strange twists of fate that connect them all. A novel of art, memory, and ambition, Station Eleven tells a story about the relationships that sustain us, the ephemeral nature of fame, and the beauty of the world as we know it.

Station Eleven is one of those books that I feel is sort of a buzz-y kind of book, and for some reason, it was a book that I didn’t pick up until recently.  I am not completely sure how I feel about it, though.

I thought the non-linear timeline was really interesting, especially since we see Jeevan, Kirsten, Clark, Miranda and Arthur throughout the book.  We’d get one person for a while, and then we’d get someone else for a while, and it’s the death of Arthur and the impact he had on people against the backdrop of a flu pandemic that results in a lot of death. Which is an interesting idea, but I am definitely not enchanted with it the way other people are.

I also spent some wondering what happened to certain characters, particularly Jeevan, who we saw at the beginning, and didn’t see for quite some time.

Everything is very much connected, and I am somewhat amazed at how connected so many of the characters were. But I was kind of expecting something more interesting.  I was interested enough to keep listening to the end, and I’m a little intrigued by the idea that art and culture is important in the worst of times, but for some reason, it felt a little overwhelming at times.  And I was surprised she didn’t draw more connections to Shakespeare.  Unless it was there and I missed it, because I remember nothing from the little Shakespeare I did read in high school.

And I did find myself, particularly with the last couple of discs, wondering how she was going to tie everything up. It was an okay ending, and I liked that there was a little bit of hope that the world was starting to re-build.  But…I don’t know.  Something about the ending was also a little too unresolved for my liking, and I’m usually okay with unresolved endings.

I would like to see a Station Eleven comic book/graphic novel, though.  I want this to be a thing, because that is something I’d want to read.

2 stars.  I get why people like it, and there were things I liked about it,  but I felt a little too disconnected from the book.