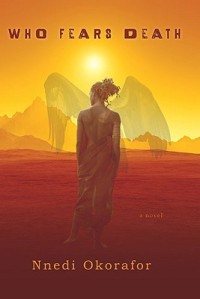 An award-winning literary author presents her first foray into supernatural fantasy with a novel of post-apocalyptic Africa.

In a far future, post-nuclear-holocaust Africa, genocide plagues one region. The aggressors, the Nuru, have decided to follow the Great Book and exterminate the Okeke. But when the only surviving member of a slain Okeke village is brutally raped, she manages to escape, wandering farther into the desert. She gives birth to a baby girl with hair and skin the color of sand and instinctively knows that her daughter is different. She names her daughter Onyesonwu, which means “Who Fears Death?” in an ancient African tongue.

Reared under the tutelage of a mysterious and traditional shaman, Onyesonwu discovers her magical destiny–to end the genocide of her people. The journey to fulfill her destiny will force her to grapple with nature, tradition, history, true love, the spiritual mysteries of her culture-and eventually death itself.

After reading (and loving) Akata Witch a few months ago, I knew I had to read everything else that Okorakor has written, so I started off with Who Fears Death.

It’s such an interesting blend of magical realism and sci-fi.  It wasn’t overtly sci-fi, but there was something about the book that felt like it had sci-fi elements.  Which was really interesting, given the magical realism in the book.  I just love how she draws from African myth.  It really makes me realize how much we need other mythologies incorporated in books, not just Greek mythology.

It’s also a post-apocalyptic Africa, which was also really cool!  I love Post-Apocalyptic stories, and this was no exception.  It’s not clear what led to this point (but you know it’s something) and I honestly didn’t care- there’s something about the way she tells a story, and in this case, it didn’t matter that I didn’t know.  Normally, it would frustrate me, but Okorafor is so good at telling a story that I didn’t even notice that aspect.  It was a different post-apocalyptic world and story than I was expecting.  Even though the world was very changed and different than the one we know today, there were some things that had never changed.  I think I’m very used to a particular post-apocalyptic story where you see the event (or at least have it explained) and then see how the world is different.

I really came to like a lot of the characters, and Onyesonwu had quite the journey.  I don’t know that I have strong thoughts on her either way, because her story, for me, was really tied to stopping genocide, and her destiny/role in things.

She created a very vivid world, and I really want to read it again to let everything sink in.  I think it’s one of those books where you need to read at least a couple of times for everything to sink in- I really feel like you’ll see something different with each read.

4 stars.  I really liked it, and Okorafor creates these really different, but also really awesome worlds that pull you in.

2 thoughts on “Book Review: Who Fears Death by Nnedi Okorafor”