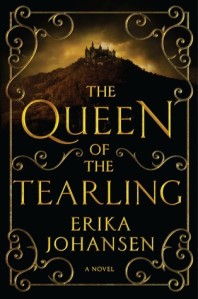 Book: The Queen Of The Tearling by Erika Johansen

Series: The Queen Of The Tearling #1

An untested young princess must claim her throne, learn to become a queen, and combat a malevolent sorceress in an epic battle between light and darkness in this spectacular debut—the first novel in a trilogy.

Young Kelsea Raleigh was raised in hiding after the death of her mother, Queen Elyssa, far from the intrigues of the royal Keep and in the care of two devoted servants who pledged their lives to protect her. Growing up in a cottage deep in the woods, Kelsea knows little of her kingdom’s haunted past…or that its fate will soon rest in her hands.

Long ago, Kelsea’s forefathers sailed away from a decaying world to establish a new land free of modern technology. Three hundred years later, this feudal society has divided into three fearful nations who pay duties to a fourth: the powerful Mortmesne, ruled by the cunning Red Queen. Now, on Kelsea’s nineteenth birthday, the tattered remnants of the Queen’s Guard—loyal soldiers who protect the throne—have appeared to escort the princess on a perilous journey to the capital to ascend to her rightful place as the new Queen of the Tearling.

Though born of royal blood and in possession of the Tear sapphire, a jewel of immense power and magic, Kelsea has never felt more uncertain of her ability to rule. But the shocking evil she discovers in the heart of her realm will precipitate an act of immense daring, throwing the entire kingdom into turmoil—and unleashing the Red Queen’s vengeance. A cabal of enemies with an array of deadly weapons, from crimson-caped assassins to the darkest blood magic, plots to destroy her. But Kelsea is growing in strength and stealth, her steely resolve earning her loyal allies, including the Queen’s Guard, led by the enigmatic Lazarus, and the intriguing outlaw known simply as “the Fetch.”

Kelsea’s quest to save her kingdom and meet her destiny has only just begun. Riddled with mysteries, betrayals, and treacherous battles, Kelsea’s journey is a trial by fire that will either forge a legend…or destroy her.

I liked Queen Of The Tearling, and I have so many thoughts on it!

So, I really liked the world.  It’s odd, because it’s very much a fantasy world, and something about it feels slightly medieval, but it’s a modern sort of medieval…or even a post-apocalyptic/dystopic medieval, if that makes any sense.  In some ways, it feels like an alternate history. There is an official religion, I guess, and something about it is Catholic Church-ish, but not quite.  Religion isn’t super-important in this world, or at least it isn’t to Kelsea, but the bible does have a few mentions.  And Lord Of The Rings and The Hobbit were mentioned at one point, which actually took me out of this world a little bit.  I do want to see how Johansen blends them together in the following books, because there is a chance that they might not work well together.  I hope it’s plausible because right now, the random references to things like Shakespeare or The Hobbit did take me out of the fantasy element.

Like, it’s clear that this world was, at one point, the world that we know today, and that something happened to make it different.  William Tear, who founded this country, came from America, and New Europe is mentioned, and they seem to live in an England-reminiscent place (particularly London).  Even the government seems to be vaguely (but not quite) English.

If you look at the series summary page on Goodreads, it describes the book as a female oriented Game Of Thrones (I can sort of see it, but at least with this first book, it doesn’t quite make sense), and that people are living in this place several centuries after some environmental catastrophe.

Here’s the thing with this book: Kelsea was smuggled away as an infant, and she knows NOTHING about her country. And because she knows nothing, we know nothing.  It’s not irritating, and it’s actually done pretty well, but it does leave me with a lot of questions.  Like, who is her father, and why is it a big deal that no one knows?  Now, if you’re going for a GoT angle, maybe it’s her uncle? And why was she in exile for so long?  I know people are trying to kill her, but why are they doing that?  Why did they send her to the people they did? Why did they not really tell her anything?  Did they feel like it would make her a better queen who would change things?  What about the rest of the world?  Is it all under the rule of the Red Queen?  I feel like there’s some other reason too, but I’m not quite sure what.  I really hope that we learn more about what led to this point, and the mystery surrounding Kelsea.

It’s such an interesting world, and even though I didn’t get the answer I wanted, I still felt like Johansen knew a lot more about the world than what we get in the book, and it made Kelsea’s world come alive.  Like I’ve said, though, it did leave me with a lot of questions that I hope are answered.

I did like Kelsea, and while she did seem to be the stereotypical naive girl who wanted to change things, she also has a lot of potential as a character.  I think a large part of it is how isolated she was growing up, so there are definitely times where she isn’t sure who to trust.  It will be interesting to see how she grows into her role as queen.

3 stars.  I liked The Queen Of The Tearling, but I have so many questions that it’s hard to give it something higher. But it does have a lot of potential, and I am curious to see if my questions will be answered at some point in the series.

2 thoughts on “Book Review: The Queen Of The Tearling by Erika Johansen”