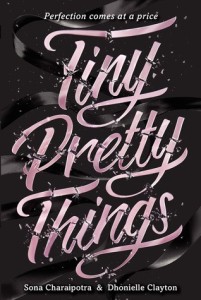 Black Swan meets Pretty Little Liars in this soapy, drama-packed novel featuring diverse characters who will do anything to be the prima at their elite ballet school.

Gigi, Bette, and June, three top students at an exclusive Manhattan ballet school, have seen their fair share of drama. Free-spirited new girl Gigi just wants to dance—but the very act might kill her. Privileged New Yorker Bette’s desire to escape the shadow of her ballet star sister brings out a dangerous edge in her. And perfectionist June needs to land a lead role this year or her controlling mother will put an end to her dancing dreams forever. When every dancer is both friend and foe, the girls will sacrifice, manipulate, and backstab to be the best of the best.

I really liked Tiny Pretty Things!  It was a really creepy mystery, and I wasn’t sure if it would live up to the comparison of Black Swan meets Pretty Little Liars…but it actually does!

Gigi, Bette and June all narrate the book, and while multiple narrators have a tendency to be hit-or-miss for me, this is a case where it worked really well.  All three girls have very distinct voices, and they all have really different stories and really different places in the school.

We have Gigi, the new girl with a heart problem, who’s also the new golden girl.  There’s Bette, who used to be the school’s golden girl, and is threatened by anyone else getting the lead (and can’t handle it when she’s not). And finally, there’s June, the girl who is not quite good enough to be the lead.

There is a mystery surrounding Gigi, and you’re trying to figure out who it is, but even now, having finished the book, I have no idea who it is.  Is it Bette, who seems like the likely culprit, even though she swears she’s innocent?  Or is it June, who’s tired of being in the shadows, and just wants to be seen for once?  I have no clue, and you could make a case for either girl. Eith it’s Bette, who’s lost her grip on reality, or June, who no one would suspect, because they’d assume it was Bette.  But then there’s part of me that feels like June and Bette are way too obvious, because they’re narrating the book.  There are a couple of people who also seem like suspects too.

It is a very competitive world, and there are definitely cruel, manipulative people in the school.  They’re all under a lot of pressure, and will do anything to be on top.  Even though I understand why people didn’t like Gigi coming in as a new girl getting the good roles, what happened to her was completely horrible.  Really, I understood where each girl was coming from, and I think I felt more for June and Gigi, because they both a love a world where a certain body type and look is very important- June and Gigi don’t fit into that look at all, and while we get a little bit of it, I kind of wish we saw more of it.

I would like to add that one of the characters does have an eating disorder , so reading Tiny Pretty Things may trigger that.

4 stars.  I really liked Tiny Pretty Things, and it’s a dark look at the world of ballet.