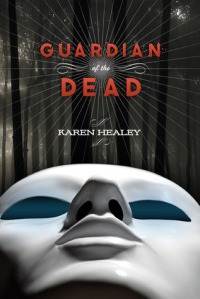 Book: Guardian Of The Dead by Karen Healy

I opened my mouth, just as he added, “And your eyes are opening.”

Seventeen-year-old Ellie Spencer is just like any other teenager at her boarding school. She hangs out with her best friend, Kevin; she obsesses over Mark, a cute and mysterious bad boy; and her biggest worry is her paper deadline.

But then everything changes. The news headlines are all abuzz about a local string of killings that share the same morbid trademark: the victims were discovered with their eyes missing. Then a beautiful yet eerie woman enters Ellie’s circle of friends and develops an unhealthy fascination with Kevin, and a crazed old man grabs Ellie in a public square and shoves a tattered Bible into her hands, exclaiming, “You need it. It will save your soul.” Soon, Ellie finds herself plunged into a haunting world of vengeful fairies in an epic battle for immortality.

Guardian Of The Dead takes place in New Zealand, and you can tell there are a lot of traditions, which was really nice to see! There wasn’t a lot of info-dumping, which was nice, but at the same time, it made me wish I were more about New Zealand and Maori myth.  It’s not that you can’t understand what’s going on, because you can (and you can always read more about it) but I think part of why I didn’t love it was because everything was slightly unfamiliar to me.  Which also made it interesting and pretty awesome because there is so much I didn’t know and it makes me want to read more about Maori myths.  The glossary at the end of the book was really helpful, and I liked that Healy had some recommended reading at the end. And that she explained the inspiration behind the book.

I’m not really sure what I was expecting when I started reading this book, but it was quite the journey! Everything starts to come to get as you keep reading, so definitely give the book some time for everything to be revealed.  And the fact that the myths were there as long as people believed in them was a really cool concept that really reminded me of Antigoddess by Kendare Blake (but in a completely different way).

Another thing I really liked about the book is the fact that Ellie’s best friend is asexual.  I liked that it wasn’t a big deal (except to anyone who has a crush on him, which seems to be quite a few people) but there was a point where I felt like it was there to make a certain plot point really stand out.  (Thankfully, that feeling didn’t last long, and it wasn’t really something that came up in that way again).  And I’m actually willing to overlook it, because I was just really excited about an asexual character.

4 stars.  Guardian Of The Dead is a really unique book, and I love that it re-tells Maori myths!

3 thoughts on “Book Review: Guardian Of The Dead by Karen Healy”