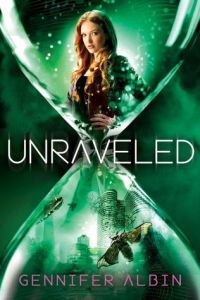 Autonomous. Independent. Dangerous. They tried to control her. Now she’ll destroy them.

Things have changed behind the walls of the Coventry and new threats lurk in its twisted corridors. When Adelice returns to Arras, she quickly learns that something rotten has taken hold of the world and Cormac Patton needs her to help him reestablish order. However, peace comes at a terrible price. As the Guild manipulates the citizens of Arras, Adelice discovers that she’s not alone, and she must let go of her past to fight for mankind’s future. She will have to choose between an unimaginable alliance and a deadly war that could destroy everyone she loves.

I really liked Crewel, but as the series has gone on, I’ve liked it less and less.  I’m not really sure how I feel about Unraveled- I’m definitely all over the place when it comes to this book!

I really was expecting more of a showdown between Cormac and Adelice, and the previous two books really made it seem liked the ending was going to be something big and action-packed, and I feel like we didn’t get that.  I also felt like the ending was rushed, and while it’s ambiguous/open-ended, I still feel pretty confident in how things will turn out for a couple of the characters. I also wish we saw more of what life was like after the people in Arras made their way to earth.

It’s also pretty slow-paced, and nothing really happens until you get to maybe the last quarter of the book. Maybe that’s why I felt slightly disappointed with how things ended.  I wanted to see Adelice fully use her abilities (old and new) and I felt like we didn’t really get enough of that in the book.  She seemed different somehow- I know she wanted to protect her sister, and who knows what happened while she was gone (months in Earth time, years in Arras time), and now that I think about it, part of me wishes we got to see part of that.

Still, I just love the idea of weaving too much to hate the book.  Part of me is glad I read this one, just because I wanted to know how it all ended, but there is part of me that maybe thinks the concept worked really well in the first & second book, but not so much in this one.  Something about this one didn’t feel as convincing as the previous two, and I kind of lost interest, which makes me sad, because I really wanted to like it so much more than I did.

Things are resolved enough, but not as much as I wanted- it felt like things were introduced, only to be never heard about again, and it makes me wish that the book were longer (or that there was another book in the series, maybe more books would have helped).

2 stars.  Unaltered was okay, and sadly, it wasn’t the ending I was expecting.  Which is unfortunate, because I really love the premise of the series as a whole.  I wish I had more to say about Unaltered, but I really don’t.